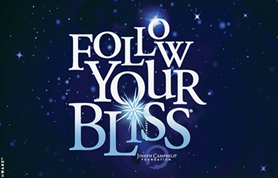 BILL MOYERS: Do you ever have the sense of... being helped by hidden hands?

JOSEPH CAMPBELL: All the time. It is miraculous. I even have a superstition that has grown on me as a result of invisible hands coming all the time - namely, that if you do follow your bliss you put yourself on a kind of track that has been there all the while, waiting for you, and the life that you ought to be living is the one you are living. When you can see that, you begin to meet people who are in your field of bliss, and they open doors to you. I say, follow your bliss and don't be afraid, and doors will open where you didn't know they were going to be.

Joseph Campbell was a life-long student and teacher of the human spirit and mythology--not just the mythology of cultures long dead, but of living myth, as it made itself known in the work of modern artists and philosophers--individuals who searched within themselves and their societies to identify the need about which they were passionate. He called this burning need that they sought to fulfill their bliss.

When Campbell died, just months after recording the interviews with Bill Moyers that were to become The Power of Myth, he had no idea how these interviews, and, in particular, this idea of following one's bliss would resonate with the public. Within months of airing on PBS in the United States, the phrase "Follow Your Bliss" had become a catchphrase.

In 1990, the Joseph Campbell Foundation was created by Campbell's colleagues and his widow, choreographer Jean Erdman. Its mission was (and is) to keep Campbell's work moving forward, helping people learn about myth, and its relationship to religion, art and psychology, and trying to help them follow their bliss.

Yet it is important to note that following one's bliss, as Campbell saw it, isn't merely a matter of doing whatever you like, and certainly not doing simply as you are told. It is a matter of identifying that pursuit which you are truly passionate about and attempting to give yourself absolutely to it. In so doing, you will find your fullest potential and serve your community to the greatest possible extent.

JOSEPH CAMPBELL: If you follow your bliss, you put yourself on a kind of track that has been there all the while, waiting for you, and the life that you ought to be living is the one you are living. Wherever you are -- if you are following your bliss, you are enjoying that refreshment, that life within you, all the time.

Now, I came to this idea of bliss because in Sanskrit, which is the great spiritual language of the world, there are three terms that represent the brink, the jumping-off place to the ocean of transcendence: sat-chit-ananda. The word "Sat" means being. "Chit" means consciousness. "Ananda" means bliss or rapture. I thought, "I don't know whether my consciousness is proper consciousness or not; I don't know whether what I know of my being is my proper being or not; but I do know where my rapture is. So let me hang on to rapture, and that will bring me both my consciousness and my being." I think it worked.