The Joseph Campbell Foundation is releasing a new e-publication entitled Art as Revelation, one of the last pieces that Campbell wrote and finished before his death. As David Kudler remarks in his Editor’s Note at the end of the piece:

This was one of the very last pieces of writing that Joseph Campbell worked on. It was written after the rest of Volume I of the Historical Atlas of World Mythology when Harper & Row announced that it was going to re-release The Way of the Animal Powers in two parts. Campbell and his editor Robert Walter decided that it was important to add “Art as a Revelation” as a foreword to the new book, Mythologies of the Great Hunt, so that it would stand on its own. He finished it in the days before his death on October 30, 1987. 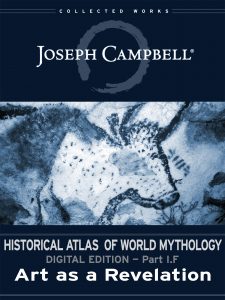 In Art as Revelation, Campbell proffers an intriguing hypothesis in which he speculates upon the forces at work—evolutionary, sociocultural, environmental, and psychic—that precipitated a startling expansion in human consciousness after the last ice age, some 30,000 years ago. Campbell refers to, and compares, the paintings in the caves of Lascaux, which are, he says, “… an ordered system of metaphorical reflections preserved from an age beyond our horizon of time…” to equally metaphorical reflections housed in the Cathedrale du Notre Dame or the temple of Vairocana (the Great Sun Buddha) in Japan, in their power to hold the viewer in an aesthetic arrest. Even Picasso remarked, after viewing the images in Lascaux, “They’ve invented everything[1].” Campbell rightly points out that one may never be able to know the impulses or purposes for paleolithic peoples to create such art, but I don’t think one can look long on these works without wondering and imagining how and why they were created, or the artist’s satisfaction and pleasure taking in the finished work, or how these works still effortlessly span an enormous gulf of time and so deeply move us some fifteen hundred generations later.

Campbell does go on to speculate upon the purpose of these drawings, the rituals that may have been enacted in those poorly lit (torches or grease lamps would have been the only light sources), damp, cool, womb-like caves, by drawing on what presently is known of tribal peoples like Bushmen, connecting similar archetypal imagery and language to Vedantic Sanskrit, modern Christianity, Plato and Marcus Aurelius, Freudian and Jungian psychoanalysis, and James Joyce. In fact, Campbell makes excellent use of Joyce’s theory of art, described in Portrait of the Artist as a Young Man, and emphasizes the role of “proper art,” the function of which is to hold the viewer in aesthetic arrest “as before a revelation” in which an awareness of the material world as it is, is suspended, and for a moment (or in the case of the artist, Campbell remarks, a lifetime), the metaphysical reality in which the world exists overwhelms one’s awareness and allows one to see through manifest forms, through the conventional understanding of what it means to be human and, finally, make a kind of sublime sense out of the horrible realities of living.

In this work, Art as Revelation, Joseph Campbell takes the reader on a surprisingly comprehensive history of homo articus, from the earliest vestiges of human imagination through philosophy, religion, literature, anthropology, and psychology, culminating in, one hopes, the reader understanding that art shows one what the world is, how it may be different, and how art acts upon it.

We are celebrating 10,000 members of the Joseph Campbell Foundation Mythic Salon on Facebook (please join us there for conversation!) and in honor of everyone who joins in JCF’s work to keep myth alive in the world, we’d like to offer you a free download of Art as Revelation.

Click the link to find the coupon code and link to the download, as well as other ideas about how can engage with the Joseph Campbell Foundation. Thank you for being a part of our mythic community.

[1] From Judith Thurman’s June 28th, 2008 New Yorker article, First impressions: What does the world’s oldest art say about us?
Free download available for a limited time only.