Found: An Ancient Monument to the Soul

Are you looking for a quotation that you can't quite place? Trying to track down a hard-to-find publication? Here, folks can help you find the answers, or discuss ways for you to discover them for yourself.

Found: An Ancient Monument to the Soul

Perhaps some may find this of interest: 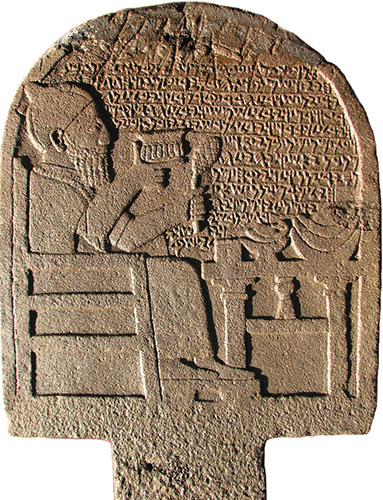 In a mountainous kingdom in what is now southeastern Turkey, there lived in the eighth century B.C. a royal official, Kuttamuwa, who oversaw the completion of an inscribed stone monument, or stele, to be erected upon his death. The words instructed mourners to commemorate his life and afterlife with feasts “for my soul that is in this stele.”

University of Chicago archaeologists who made the discovery last summer in ruins of a walled city near the Syrian border said the stele provided the first written evidence that the people in this region held to the religious concept of the soul apart from the body. By contrast, Semitic contemporaries, including the Israelites, believed that the body and soul were inseparable, which for them made cremation unthinkable, as noted in the Bible.

Other scholars said the find could lead to important insights into the dynamics of cultural contact and exchange in the borderlands of antiquity where Indo-European and Semitic people interacted in the Iron Age.

The official’s name, for example, is Indo-European: no surprise, as previous investigations there had turned up names and writing in the Luwian language from the north. But the stele also bears southern influences. The writing is in a script derived from the Phoenician alphabet and a Semitic language that appears to be an archaic variant of Aramaic.

The discovery and its implications were described last week in interviews with archaeologists and a linguist at the University of Chicago, who excavated and translated the inscription.

“Normally, in the Semitic cultures, the soul of a person, their vital essence, adheres to the bones of the deceased,” said David Schloen, an archaeologist at the university’s Oriental Institute and director of the excavations. “But here we have a culture that believed the soul is not in the corpse but has been transferred to the mortuary stone.”

A translation of the inscription by Dennis Pardee, a professor of Near Eastern languages and civilization at Chicago, reads in part: “I, Kuttamuwa, servant of [the king] Panamuwa, am the one who oversaw the production of this stele for myself while still living. I placed it in an eternal chamber [?] and established a feast at this chamber: a bull for [the god] Hadad, a ram for [the god] Shamash and a ram for my soul that is in this stele.”

Dr. Pardee said the word used for soul, nabsh, was Aramaic, a language spoken throughout northern Syria and parts of Mesopotamia in the eighth century. But the inscription seemed to be a previously unrecognized dialect. In Hebrew, a related language, the word for soul is nefesh.

In addition to the writing, a pictorial scene chiseled into the well-preserved stele depicts the culture’s view of the afterlife. A bearded man wearing a tasseled cap, presumably Kuttamuwa, raises a cup of wine and sits before a table laden with food, bread and roast duck in a stone bowl.

In other societies of the region, scholars say, this was an invitation to bring customary offerings of food and drink to the tomb of the deceased. Here family and descendants supposedly feasted before a stone slab in a kind of chapel. Archaeologists have found no traces there of a tomb or bodily remains.

Joseph Wegner, an Egyptologist at the University of Pennsylvania, who was not involved in the research, said cult offerings to the dead were common in the Middle East, but not the idea of a soul separate from the body — except in Egypt. (Click HERE for the whole NYTimes article.)

Give me stories before I go mad! ~Andreas
Top

Interesting, but no soul needs any monument in stone, to be immortal.

And the very Human (and very truthful) belief in the eternal life of Human Souls, has been told by many stories of my neighbours (literally my next-door-neighbours), the Australian Aborigines, for at least the past 40,000 years. They just take it for granted, as a "self-evident" truth, and rightly so.

My Australian Aborigine next-door neighbours are very impressed by how my garden is doing, during this Australian springtime. I have already begun to share with them, some first fruits of my garden. My 40,000 year old garden. What do they, and I, think about "immortality"? Nothing. We simply enjoy living here, and sharing the fruits of our land, year after year, while we live here.

"Immortality?" In Australia, that concept is superfluous, and has been superfluous for 40,000 years, and ever since the dawn of Man 60, 000 years ago - the time of our metaphorical forefather "Adam" - on this Earth.

And so, what all of the very recent "civilisations" of Man have said about "immortality of the Human Soul" for a mere 5,000 years or so, PALES in comparison to what the natives of Australia have known ever since the Human Race began in Africa 60,000 years ago, that life and death are inseparable partners on our beloved Earth.
Top

I wonder if the statement "...my soul which is in this stele." is literal, or if the person viewed the stele as a representation of the soul- my soul which is represented on this stele? I am always curious about what subtleties are lost in translations.
Top
Locked
3 posts • Page 1 of 1

Return to “The Wisdom Pool: The Associates Research Dialogue”