My favorite poem. What 's yours?

Joseph Campbell formulated what became his most quoted dictum, "Follow your bliss" in the decade before his death. Join this conversation to explore this idea and share stories.

I 'm a newcomer on this forum. Greetings to you all. Bringing a (small) present four you. Maybe you answer with your own poem about your bliss or life-motto.

'And when the Final Scorer comes
to write against your name
He will not ask if you won or lost
but how you played the Game. '

There is so much in this poem.

Hoping we have a good time together and lots of wisdom.

He Wishes For The Cloths Of Heaven

Had I the heavens' embroidered cloths,
Enwrought with golden and silver light,
The blue and the dim and the dark cloths
Of night and light and the half-light,
I would spread the cloths under your feet:
But I, being poor, have only my dreams;
I have spread my dreams under your feet;
Tread softly because you tread on my dreams.

So, we'll go no more a-roving
So late into the night,
Though the heart be still as loving
And the moon be still as bright.

For the sword outwears its sheath
And the soul wears out the breast
And the heart must pause to breathe
And love itself have rest.

Though the night was made for loving
And the day returns too soon,
Yet, we'll go no more a-roving
By the light of the moon.

O sweet spontaneous
earth how often have
the
doting

thee
,has the naughty thumb
of science prodded
thy

beauty .how
often have religions taken
thee upon their scraggy knees
squeezing and

buffeting thee that thou mightest conceive
gods
(but
true

to the incomparable
couch of death thy
rhythmic
lover

I LIVE MY LIFE

I live my life in growing orbits,
which move out over the things of the world.
Perhaps I can never achieve the last,
but that will be my attempt.

I am circling around God, around the ancient tower,
and I have been circling for a thousand years,
and I still don't know if I am a falcon, or a storm,
or a great song.

My eyes already touch the sunny hill,
going far ahead of the road I have begun.
So we are grasped by what we cannot grasp;
it has its inner light, even from a distance --

and changes us, even if we do not reach it,
into something else, which, hardly sensing it, we already are;
a gesture waves us on, answering our own wave...
but what we feel is the wind in our faces.

UNTIL ONE IS COMMITTED

Until one is committed, there is a hesitancy,
the chance to draw back, always ineffectiveness.
Concerning all acts of initiative (and creation)
there is one elementary truth, the ignorance of which kills countless ideas and splendid plans:
that the moment one definitely commits oneself,
then Providence moves too. All sorts of things
occur to help one that never would otherwise have occurred. A whole stream of events issues
from the decision, raising in one’s favor all
manner of unforeseen incidents and meetings and material assistance, which no person could
have dreamed would have come his or her way.


Whatever you can do
or dream you can, begin it.
Boldness has genius,
power and magic in it.

A Ritual To Read To Each Other
—William Stafford

For there is many a small betrayal in the mind,
a shrug that lets the fragile sequence break
sending with shouts the horrible errors of childhood
storming out to play through the broken dyke.

And as elephants parade holding each elephant's tail,
but if one wanders the circus won't find the park,
I call it cruel and maybe the root of all cruelty
to know what occurs but not recognize the fact.

And so I appeal to a voice, to something shadowy,
a remote important region in all who talk:
though we could fool each other, we should consider—
lest the parade of our mutual life get lost in the dark.

For it is important that awake people be awake,
or a breaking line may discourage them back to sleep;
the signals we give—yes or no, or maybe—
should be clear: the darkness around us is deep


Give me stories before I go mad! ~Andreas
Top

Enki, welcome to the forums!

Darkrivers, I'm a fan of Rilke too!


Forget, forget, and let's just live this now,
how the stars pierce the cleared night sky,
how the moon floats full out over the gardens.
We've felt this for so long now,
how the darkness mirrors more and more;
how a shimmer is born,
a white shadow in the shining dark.
But now let's go all the way over
into the world that's lunar--


Every angel is terrifying. And yet, alas, I invoke you,
almost deadly birds of the soul, knowing about you.
Where are the days of Tobias, when one of you, veiling his radiance,

stood at the front door, slightly disguised for the journey, no longer appalling;

(a young man like the one who curiously peeked through the window).
But if the archangel now, perilous, from behind the stars took even one step down toward us:

our own heart, beating higher and higher, would beat us to death.
Who are you?

mountain-ranges, peaks growing red in the dawn of all beginning,--

pollen of the flowering godhead, joints of pure light,

shields made of ecstasy, storms of emotion whirled into rapture, and suddenly alone:

mirrors, which scoop up the beauty that has streamed from their face

and gather it back, into themselves, entire.


But we, when moved by deep feeling, evaporate; we breathe ourselves out and away;

from moment to moment our emotion grows fainter, like a perfume.
Though someone may tell us: "Yes, you've entered my bloodstream, the room,

the whole springtime is filled with you . . . "--what does it matter? he can't contain us,

we vanish inside him and around him.
And those who are beautiful, oh who can retain them?
Appearance ceaselessly rises in their face, and is gone.
Like dew from the morning grass, what is ours floats into the air, like steam from a dish of hot food.
O smile, where are you going?
O upturned glance: new warm receding wave on the sea of the heart . . .

alas, but that is what we are.
Does the infinite space we dissolve into, taste of us then?
Do the angels really reabsorb only the radiance that streamed out from themselves,

or sometimes, as if by an oversight, is there a trace of our essence in it as well?
Are we mixed in with their features even as slightly as that vague look

in the faces of pregnant women?
They do not notice it (how could they notice) in their swirling return to themselves.


Lovers, if they knew how, might utter strange, marvelous words in the night air.
For it seems that everything hides us.
Look: trees do exist; the houses that we live in still stand.
We alone fly past all things, as fugitive as the wind.
And all things conspire to keep silent about us, half out of shame perhaps, half as unutterable hope.


Lovers, gratified in each other, I am asking you about us.
You hold each other. Where is your proof?
Look, sometimes I find that my hands have become aware of each other,

or that my time-worn face shelters itself inside them.
That gives me a slight sensation.
But who would dare to exist, just for that?
You, though, who in the other's passion grow until, overwhelmed, he begs you:
"No more . . . "; you who beneath his hands swell with abundance,

like autumn grapes; you who may disappear because the other has wholly emerged:
I am asking you about us.
I know, you touch so blissfully because the caress preserves,

because the place you so tenderly cover does not vanish;

because underneath it you feel pure duration.
So you promise eternity, almost, from the embrace.
And yet, when you have survived the terror of the first glances,

the longing at the window, and the first walk together, once only, through the garden:

lovers, are you the same?
When you lift yourselves up to each other's mouth and your lips join,

drink against drink: oh how strangely each drinker seeps away from his action.


Weren't you astonished by the caution of human gestures on Attic gravestones?
Wasn't love and departure placed so gently on shoulders

that it seemed to be made of a different substance than in our world?
Remember the hands, how weightlessly they rest, though there is power in the torsos.
These self-mastered figures know: "We can go this far,

this is ours, to touch one another this lightly; the gods can press down harder upon us.
But that is the gods' affair."


If only we too could discover a pure, contained, human place,

our own strip of fruit-bearing soil between river and rock.
Four our own heart always exceeds us, as theirs did.
And we can no longer follow it,

gazing into images that soothe it or into the godlike bodies where,

It is the journey, right?

You also gave us a very nice greeting. I too am new here and have so much to learn.

Thank you for sharing your poem!

I am so small
Less than small, I am naught at all.
I am lost and, yes, alone.
I am here; Here and gone.

My life is short
And time is fast. Already past.
Still, a trace remains of me
Unto eternity.

I cannot hear.
I cannot speak. The one I seek
Inside myself, the silent
One, I AM, is silent.

I wonder at
The great divide between my one
And other side that I see
Illuminating me.

For deep within
The universe is the one word
Spoke in single verse. I am
It's echo, echoing.

Can you hear me?
Speak my name! Stir again the flame
And I will burn like starlight
On and on! Here AND Gone.
Here, AND Gone.

Twas brillig and the slithey toves...

The first (no longer favorite) poem that struck me as a 'follow your bliss'ode was "HOWL" by Ginsberg. It seems part of the Beat ethos was to follow bliss, it was well sought at any rate!

What is that sound high in the air
Murmur of maternal lamentation
Who are those hooded hordes swarming
Over endless plains, stumbling in cracked earth
Ringed by the flat horizon only
What is the city over the mountains
Cracks and reforms and bursts in the violet air
Falling towers
Jerusalem Athens Alexandria
Vienna London
Unreal

-from The Waste Land by T.S. Eliot

This sonnet by Robert Frost amazes me. It is a tribute to the poet’s wife using the metaphor of a silken tent on a summer’s day. It follows the sonnet form perfectly with iambic pentameter and rhymes, yet it flows as one complete sentence, making it look easy and natural. And what is described could only be described by metaphor – the peculiar beauty of the human soul.

She is as in a field of silken tent
At midday when a sunny summer breeze
Has dried the dew and all its ropes relent,
So that in guys it gently sways at ease,
And its supporting central cedar pole,
That is its pinnacle to heavenward
And signifies the sureness of the soul,
Seems to owe naught to any single cord,
But strictly held by none, is loosely bound
By countless silken ties of love and thought
To everything on earth the compass round,
And only by one’s going slightly taut
In the capriciousness of summer air
Is of the slightest bondage made aware. 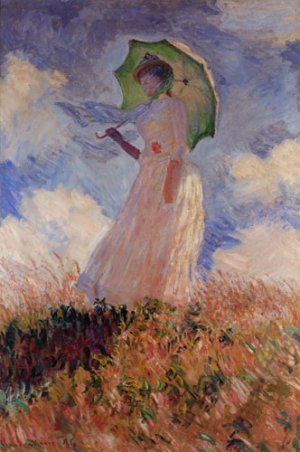 Woman with a Parasol, looking Left