My favorite poem. What 's yours?

Joseph Campbell formulated what became his most quoted dictum, "Follow your bliss" in the decade before his death. Join this conversation to explore this idea and share stories.

One's life is like a sword forged by a master smith.
Hammered by the blows of life upon the anvil of the world.
Tempered in the fires of personal torment.
But if we prove true, and show no flaws,
Then we are a suitable weapon for the hand of God.

My only published poem, under my pen name Little Feather.

I had to think about this for a long time. I'm not a great poetry buff. However, I LOVE music, and poetry in music always talks direct to my inner self.

My favourite actually comes from the end of a modern myth, shared in movie form. From the end of the Lord of the Rings trilogy, the song sung by Annie Lennox. If you read the lyrics you will realise that it talks to the heart of much of what we speak about and discuss in our more lucid "conversations."

Why do you weep?
What are these tears upon your face?
Soon you will see
All of your fears will pass away
Safe in my arms
You're only sleeping

What can you see
On the horizon?
Why do the white gulls call?
Across the sea
A pale moon rises
The ships have come to carry you home

At the kind suggestion of ShantiBliss, may I add a poem by John Henry Newman which is really speaking to me right now?
"Lead , kindly Light, amid the encircling gloom,
Lead thou me on;
The night is dark, and I am far from home,
Lead thou me on.
Keep thou my feet; I do not ask to see
The distant scene; one step enough for me.

I was not ever thus, nor prayed that thou
Shouldst lead me on;
I loved to choose and see my path; but now
Lead thou me on.
I loved the garish day, and, spite of fears,
Pride ruled my will; remember not past years.

So long thy power hath blest me, sure it still
Will lead me on
O'er moor and fen, o'er crag and torrent, till
The night is gone,
And with the morn those Angel faces smile,
Which I have loved long since, and lost a while."
Thank you all for sharing your favourite poems. I have so many!
Bless you all - Denise.
Top

Firstly, may I apologise to both ShantiSong and BodhiBliss for a fortunate but unintended conjunction!?
Before I lose the flow here, may I introduce you to an Australian poem that has stayed with me since my childhood more years now than I care to calculate?
It was written by Henry Kendall about an Australian aborigine.
It's called "The Last of His Tribe."

The wallaroos grope through the tufts of the grass,
And turn to their coverts for fear;
But he sits in the ashes and lets them pass
Where the boomerangs sleep with the spear -
With the nullah, the sling and the spear.

Uloola, behold him! The thunder that breaks
On the tops of the rocks with the rain,
And the wind which drives up with the salt of the lakes,
Have made him a hunter again -
A hunter and fisher again.

For his eyes have been full with smouldering thought;
But he dreams of the hunts of yore,
And of foes that he sought, and the fights that he fought
With those who will battle no more -
Who will go to the battle no more.

It is well that the water which tumbles and fills,
Goes moaning and moaning along;
For an echo rolls out from the sides of the hills,
And he starts at a wonderful song -
At the sound of a wonderful song.

And he sees, through the rents of the scattering fogs,
The corroboree warlike and grim,
And the lubra who sat by the fire on the logs,
To watch, like a mourner, for him -
Like a mother and mourner for him.

Will he go in his sleep from these desolate lands,
Like a chief, to the rest of his race,
With the honey-voiced woman who beckons and stands,
And gleams like a dream in his face -
Like a marvellous dream in his face?

Perhaps in this neglected spot is laid
Some heart once pregnant with celestial fire;
Hands, that the rod of empire might have sway'd,
Or wak'd to ecstasy the living lyre.

But Knowledge to their eyes her ample page
Rich with the spoils of time did ne'er unroll;
Chill Penury repress'd their noble rage,
And froze the genial current of the soul.

Let not Ambition mock their useful toil,
Their homely joys, and destiny obscure;
Nor Grandeur hear with a disdainful smile
The short and simple annals of the Poor.

The boast of heraldry, the pomp of power,
And all that beauty, all that wealth e'er gave,
Awaits alike th' inevitable hour:-
The paths of glory lead but to the grave.

-from An Elegy Written in a Country Churchyard, Thomas Gray, 1750 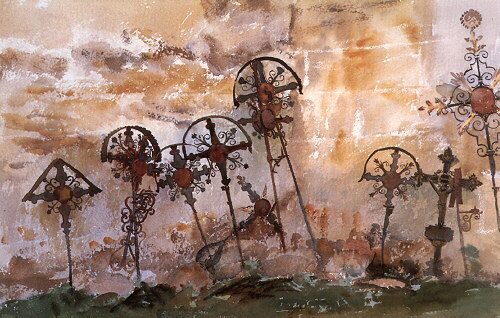 Aaaah!
Music sung by the soul!
Thanks Shanti.
Denise

We shall not cease from exploration<br>And the end of all our exploring<br>Will be to arrive where we started<br>And know the place for the first time.<br>T.S.Eliot.
Top

"Don't ever just lay down and die."

"One foot in front of the other...and pretty soon you're through it"

"This time next week you'll look back on all this and laugh."

"So what? The world will still keep turning, the sun'll still come up tomorrow."

Theres something about life mottos from parents that just cheer me up. I really like "This time next week you'll look back on all this and laugh." I will always keep that in my mind when ever school gets to bogged down. Daily life can get so agravating sometimes. It's sad but in school I am living for the weekend, and then still have I work to do.

Better than a thousand useless words is one word that gives peace.- Buddha<br>Let yourself be free.

It reminds me of this famous Langston Hughes poem:

Mother to Son
by Langston Hughes

Well, son, I'll tell you:
Life for me ain't been no crystal stair.
It's had tacks in it,
And splinters,
And boards torn up,
And places with no carpet on the floor—
Bare.
But all the time
I'se been a-climbin' on,
And reachin' landin's,
And turnin' corners,
And sometimes goin' in the dark
Where there ain't been no light.
So, boy, don't you turn back.
Don't you set down on the steps.
'Cause you finds it's kinder hard.
Don't you fall now—
For I'se still goin', honey,
I'se still climbin',
And life for me ain't been no crystal stair.

And where we had thought to find and abomination;
We shall find a god

Where we had thought to slay another;
We shall slay ourselves

Where we had thought to travel outward;
We shall come to the center of our own existence

Where we had thought to be alone;
We shall be with all the world

We have not even to risk...

Shanti, that's prose, not poetry -- however, one of the most consolatory quotes of Joe's I know.
Top

It is not written - it is not law - that the words of Joseph Campbell on page 25 of Faces or any other writing of Campbell shall be read as prose and not poetry. Ever since Americans invented free verse in the mid 19th century poetry is in the eye of the beholder.

It’s poetry to me. <IMG SRC="/forum/images/smiles/icon_smile.gif">

Men say they know many things,
But, lo, they have taken wings,
The arts and sciences,
A thousand appliances,
-- the wind that blows
is all that anybody knows.

Each of us is destined to become the hero in at least one story -- our own! (adapted from P.L. Travers)
Top

Inner Strength comes from those moments in life that fill us with despair. It shatters the weariness of our sad and beaten souls and instills within us the determination to reclaim our empowerment so that we may be heroes unto ourselves.

Courage comes from the conviction that our path is right and true. It forges character and strengthens the mesh of our integrity. It defines our desire to be worthy of something meaningful while it nurtures all that we aspire to be.

Faith comes from any belief that is built upon hope. It illuminates our deepest and darkest moments as it quietly reminds us that there are no impossibilities
except for those we impose upon ourselves.

Beauty comes from the heart of the mind and the eyes of the soul. It inspires us to love beyond the limits of mere mortals and it justifies our desire for a grace that brings meaning and measure to a life created.

Love comes from that Sacred place that can never be defined. It challenges us to rise above our hate and fears and asks us to acknowledge and embrace the qualities of the Human Condition that moves us to be One.