MythBlast | A Little Rebellion is a Good Thing

¡Feliz Cinco de Mayo! Cinco de Mayo is a holiday that began to be celebrated in California in the 1860’s marking the Battle of Puebla. It is not, as it is commonly misunderstood to be, the same as Mexican Independence Day which is celebrated later in the year on September 16th. At the Battle of Puebla, a much stronger French force was demolished by a smaller, poorly armed Mexican force, a remarkable feat given that in 1861 the French were considered to possess the greatest military force in the world. This Mexican victory reinvigorated a flagging resistance and sparked a fierce patriotism in Mexico as it continued its fight for self-determination. 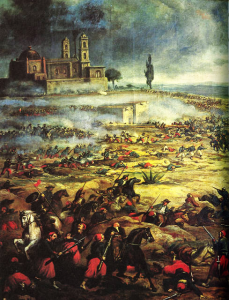 While Cinco de Mayo is not a national holiday in Mexico, it has become an enormously popular celebration of Mexican-American culture in the United States. And with good reason; the U.S. owes its present-day constellation to Mexico’s May 5th defeat of the French because if the French had not been so badly beaten at Puebla, they would most certainly have entered the American Civil War on the side of the Confederacy, drastically shifting the balance of power and altering the destiny of the U.S. But Cinco de Mayo is not only a Mexican-American celebration; in various forms it has migrated around the world: Canada, Jamaica, Australia, and New Zealand all hold Cinco de Mayo celebrations; Europe, South Africa, Nigeria, and even Japan host May 5th celebrations of Latin American culture.

Harbored deep in the soul of political revolution is the idea of autonomy, that human beings possess natural, unalienable rights of which they shall not be deprived by governments nor by agreements between governments. The foremost of these natural, human rights is that human beings must be independent and free. In many ways, I think this idea of human freedom is the condition sine qua non, the fundamental subject with which myth wrestles. Regardless of setting, regardless of epoch or era, regardless of culture, the fundamental question of myth becomes how does a human being find freedom and to what degree may she be free? To what degree must I acknowledge and accept limitation, whether that limiting force is imposed upon me by gods, natural forces, or military might?

In myth, the exploration of freedom is often accompanied by the emotional experience the French existentialist, J.P. Sartre, calls “anguish.” It is often remarked that freedom is a terrible responsibility and, as such, is often refused. What makes freedom terrible, in large part, is the anguish accompanying it: the anguish of forced choices in the face of uncertainty and ignorance, anguish at the consequences (intended or not) of our decisions, and most of all anguish over the imperative—the human responsibility—to create our own existence. Nowhere is anguish better dramatized than in the tragedies of Sophocles, Aeschylus, and Euripides who, for instance, laments “in childbirth grief begins.”

It’s not an accident, I think, that in spring a people’s thoughts may turn to revolution. The breaking up and turning over of earth to herald new life can’t fail to inspire thoughts of overthrowing oppressors, autocrats, or absolutisms. So many revolutionary acts occurred in springtime: Lexington-Concord, the Arab Spring, May Revolutions in France and Argentina, and strikingly, the Revolutions of 1848 across Europe and known variously as People’s Spring, Spring of Nations, and Springtime of the Peoples. In springtime, there is also a call to personal revolution, to live a new life that is richer, deeper, and somehow more meaningful. Revolutions, as Marx suggested, may well be the locomotives of history but personal revolutions are the locomotives of living.

You can read more about what Campbell thinks about revolution in Pathways to Bliss; please click the link to stop by the Joseph Campbell Foundation website and learn how you can get a copy.