MythBlast | An Impossible Thanksgiving: Story of the Birds and Beasts and the Son of Adam 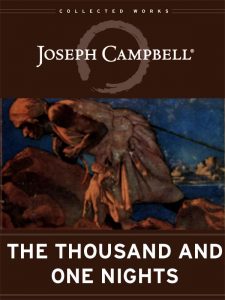 On the 146th night of Scheherazade’s captivity, as told in Joseph Campbell’s edition of The Thousand and One Nights, The Story of the Birds and Beasts and the Son of Adam keeps her sovereign Sultan from ending her life. In this translation by John Payne edited by Joseph Campbell, the fairytale affords a comical glimpse at our own species’ collective shadow.

Like all tales of this sort, the story shifts our human point of view to that of animals, especially those that have been “domesticated” by our industry. The story imagines the terrifying, omnipotent figure that humanity must cut in the eyes and flesh of animal-kind, in their day-to-day suffering, in their subservience to humankind. Looking through the inverted mirror of myth, our celebrated creative qualities and ingenuity are reflected into the shadow of a trickster figure, the archetype most closely resembling humankind. Through the lens of the trickster, our creativity exhibits itself in the destructive aspects of human industry, craft, and skill, the very instruments through which we exert absolute dominion over other species—as well as over our own—with unrelenting greed and cruelty.

“The Story of the Birds and Beasts and the Son of Adam” projects an image of humankind which is not opposed to, nor built against the concept of “beasts”; it is rather an image of ourselves as the sovereign beasts on this planet.

Beginning with the appearance of a duck on an “island abounding in trees and streams,” a virtual paradise untouched by humankind, the account of the treacherous ways of the “Sons of Adam” is related again and again. The wily character of the sovereign beast was already imprinted in the soul of every animal that immigrated to the island. One after the other—a lion whelp, a runaway ass, a black horse, a furious camel—each beast gives a similar account of their first and last encounter with a Son of Adam. As the birds listen intently, we hear about diabolical technological means through which humanity exerts its dominion over all creatures.

The shocking truth that is finally revealed, however, comes in the guise of man himself: a poor human carpenter who claims to be a victim of the Sons of Adam as well. The old carpenter suggests to the animals that whatever the sons of Adam are capable of doing to beasts, they are quite happy to do to one another. Man is the sovereign beast which devours itself and all others: Homō hominī lupus est.

Now, with this insight into the dark side of human nature, how could we possibly build a bridge between that and a feeling of deep gratitude for the whole? Is it possible to find a mode of gratitude that does not exclude the pain of its shadow—including our sins, our treachery and inhuman cruelty?

Like the portentous dream of the duck at the beginning, the story ends with a warning against a false sense of gratitude based in a deep persecutorial anxiety. Perfectly happy to endorse the status quo, content with its privileges and given power structure, this final attitude is revealed in the person of antelope. For antelope was the last and only animal seemingly ignorant of humankind upon arrival, although he is quickly made aware of the extent of our murderous treachery as the island is finally “discovered” by the Sons of Adam.

Despite the tragic loss of duck, the peacocks and antelope are able to escape this last encounter and are thankful for having survived. Unable to think through the meaning of the situation, an attitude of mediocre self-contentment finally emerges among survivors, a feeling of resignation and unease which is perfectly captured by antelope’s final prayer: 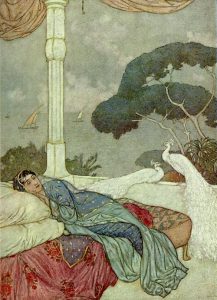 It is as though the myth were asking us: is gratitude simply a way to acknowledge our dependence on worldly masters? Or is it a ritual worship of the unjust world order against which we are pleased to “count our blessings”? Touting a kind of ‘slave morality’ of its own, the antelope’s prayer allows us to rest content with a “business as usual” kind of attitude—together with the collective shadow that is pushing us to the brink of extinction. By narrowly concentrating on personal wealth and power, our sense of gratitude remains enclosed in a narcissistic bubble, a mechanism of fetishistic disavowal, which is portrayed by antelope and peacocks’ final subjective attitude.

Thus the story ends with this comical note, a sad joke which is made to stand for the failure to cope with the situation that threatens all living creatures: duck’s tragedy and the deep inheritance of persecutory anxiety. Rather than splitting the psyche into personal vs. collective, or creative vs. destructive, true insight rests in the recognition of opposites always touching each other in the depths of the psyche. “The secret,” as Jung says, “is that only that which can destroy itself is truly alive” (The Portable Jung, 345). In a truly transcendent sense of gratitude, therefore, we could even be thankful of the destructive impulses of humankind in the drive towards the whole of creative being itself.

In a mode of gratitude that is no longer based on fear and anxiety, we could acknowledge the wound of the existential crisis as a gift in disguise. Not that the literal destruction of the environment and loss of lives are gifts, but that the responsibility we take is the gift and the light of the future. For this responsibility points the way to a revolution of the collective soul which will end and begin anew the history of human life on earth.