MythBlast | Campbell and Esalen: An Enduring Quest for Meaning

After the stock market crash in the late 1920’s and struggling to find a job, Joseph Campbell decided to seek adventure in travel. 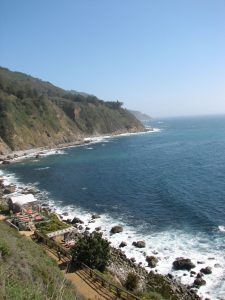 He found himself on the coast of Northern California. Bob Walter, Joseph Campbell Foundation President writes in an essay on Campbell’s life:

His travels next carried him north to San Francisco, then back south to Pacific Grove, where he spent the better part of a year in the company of Carol and John Steinbeck and marine biologist Ed Ricketts. During this time, he wrestled with his writing, discovered the poems of Robinson Jeffers, first read Oswald Spengler’s Decline of the West, and wrote to some seventy colleges and universities
in an unsuccessful attempt to secure employment.

Almost forty years later, Campbell returned to the wilds of the California coast, and became a lecturer and scholar in residence at Esalen Institute in 1965. Bob continues, in the same essay:

Each year thereafter, he returned to Big Sur to share his latest thoughts, insights, and stories. And as the years passed, he came to look forward more and more to his annual sojourns to the place he called “paradise on the Pacific Coast.” Although he retired from teaching at Sarah Lawrence in 1972 to devote himself to his writing, he continued to undertake two month-long lecture tours each year.

One of the great moments of annual celebration was his birthday, on March 26, where friends, colleagues, and students would gather at Esalen and explore his latest thoughts on the intersections between mythology and personal development. (And raise a glass or two of scotch!)

Decades later, that celebration continues in that spirit, with a week-long playshop diving into the the power of the hero’s journey arc as a metaphor for own own lives, however un-mythic they may feel.

On my the week of my fiftieth birthday (also Campbell’s birthday, a little to-me synchronistic factoid that I clutch with a somewhat self-amused but yet intent sense of its importance), I found myself at one of these playshops, discovering the ritual of birth and rebirth in this moment of midpoint in my life. It was an astonishingly powerful experience. I am immersed in mythology in many ways, endlessly fascinated by the connections between how we imagine, how we build story and metaphor, and how that can open our psyches. I went there not only at fifty, braving the hot springs surrounded by the beauty of the semi-feral young Esalen workers as I reluctantly shed layers of clothing, but also, at a moment where a new and much-loved venture was teetering on impossibility.

It was, at the risk of badly using Campbell’s phrase, a blissful experience. Deep, rich, at times surprisingly hard, and flowering open into a gift of certainty that I was on the right path, the path that I was forging into the dark wood. It solidified my belief in the work of the Foundation as a new Board member, and inspired me to talk Bob into offering an East Coast version of the workshop at that once-teetering venture, a retreat center in the Catskills, every July.

This year, the Joseph Campbell Foundation is offering Revisioning Your Hero’s Journey®: A Mythological Toolbox® PlayShop for the twenty-fifth time at Esalen.

As I think about my experience there and how it has rolled out into my sense of who I am, I find myself reaching to Campbell himself to try to explain its effects on my sense of reaching towards the rightness in my life. Not surprisingly, he says it better than I would.
> 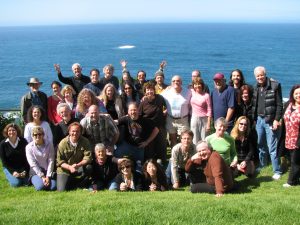 If you’re interested, you’re most cordially invited to join those gathering for this twenty-fifth year at Esalen, savoring an embodied experience of how myth can work in our psyches. In any event, I hope that you find that sense of being present, even for a moment, as this new year unfolds.