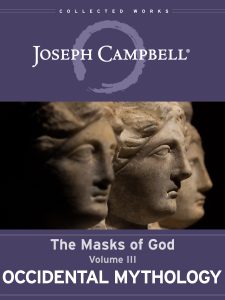 In this fall season, when masks are donned in the celebration of our collective shadow, we may naturally consider Campbell’s own discussion of divine masks. However, when I revisit Campbell’s Masks of God, vol. III: Occidental Mythology, it is the current discussions surrounding Artificial Intelligence that keep rising in my thoughts. After all, considerations of space and time were recurring themes in the work of Joseph Campbell. His recognition of relationships that intertwined these ideas and the organization of narratives and rituals takes on new and interesting dynamics when we consider their impact in light of the technologies emerging decades after Campbell’s death.

While discussing the age of great beliefs, Campbell compares the emphases on external and internal space in the Greek temple with those found in the mosque. He explains that the Greek temple stressed the exterior with its columns, but favored simplicity within its interior. The mosque, Campbell states, was all interior – “an architectural likeness of the world-cavern…the proper symbol of the spiritual form of the universe” (Occidental Mythology, “Introduction”). Virtual Reality similarly attempts to marry our external experiences with the possibilities of the inner cave. VR technology requires us to place a mask over our eyes. But as in the ritualistic experiences involved in the ancient Mysteries, an entirely new world is opened up before us in the darkness of this virtual mask. We move in new landscapes with new narratives. Now, late in the second decade of the 21st century, people don’t just want to be told a story, they want to be placed inside the story. VR offers fulfillment of this ritualistic desire within the digital landscape, serving as a mask that is simultaneously entirely new and incredibly familiar. 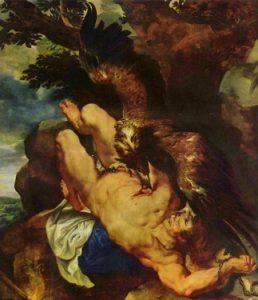 Use and engagement with AI, of course, brings an entirely new set of considerations and ethical questions for those interested in mythology, as well as anyone concerned with the essential question of what it means to be human in the world. We are reminded, of course, of Prometheus and the punishments that can befall those that use nature-transcending technology to accomplish transhuman feats, which there are entire communities dedicated to (see transhumanism or H+ for more insights). The topic is certainly worthy of a much greater discussion at another time, but for our purposes, remains a lens that must be at least considered within any discussion of the mask of Virtual Reality.

After his observations about temples and mosques, Campbell goes on to offer a description of the mythological traditions originating in the eastern part of the Mediterranean that could be a synchronicity for Virtual Reality and the narratives currently being crafted. He says:

An awesome, all-pervading sense of bounded space and time, as a kind of Aladdin cave within which light and darkness, good and evil, grace and willfulness, spirit and soul, interplay to create, instead of history, a mighty fairy tale of divinely and diabolically motivated agents, fills all the mythologies of the Levant – whether of Judaism, Zoroastrianism, Mithraism, Manichaeism, Eastern Christianity, Neoplatonism, Gnosticism, the late Classical Mysteries, or Islam. And the cognate view of the individual in this world is not of an individual at all, but of an organ or part of the great organism. (Occidental Mythology, “Introduction”) 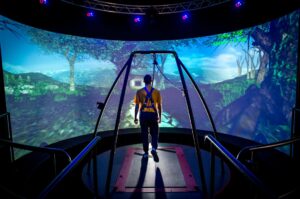 This final statement made by Campbell is an idea that has been explored deeply within VR communities. Steven Spielberg’s Ready Player One, based on the novel by Ernest Cline, projects an ideal for Virtual Reality in the form of a virtual world, called the Oasis – a futuristic cave of Aladdin, full of endless possibilities and wonders. Spielberg’s—and thus Cline’s—vision for VR is that amidst all these marvels,VR would curate a view of the individual in the virtual world as not just an individual, but as part of something much greater, as Campbell suggested.

Bill Moyers recalled a particular conversation with Campbell in the introduction to The Power of Myth, where Campbell enthusiastically lauded how George Lucas had updated the classic story of the hero in Star Wars. However, he was equally excited that Lucas had been able to communicate what Goethe said in Faust – that our technology would not save us, but we would need something more – something wrapped in a new idiom. Our tools, our machines, our computers are not enough; our intuition, our true being is vital. The same idea can be applied to VR and AI. They, too, are tools to further our communication, enhance experiences, and ideally expand our consciousness. They are not the answers. But they do open up new paths that help us better search for the answers together.