MythBlast | Dancing in the New Year 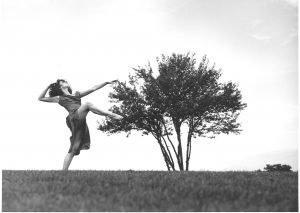 For those of us following the Julian calendar which probably includes most anyone reading an e-mail on the Internet, I imagine, a new year has just begun; an opportunity to turn the page, to open a new chapter in the story of our lives. Perhaps you’ve made resolutions this year about things you’d like to do, or do differently. Perhaps you’ve already broken them.

No worry. Everyday is a chance to begin again.

For many of us this new beginning is an opportunity to commit to an artistic vision that has struggled to stay alive inside us as we hurry about the life we think we’re supposed to be living. Making the commitment to give that vision the time, space and unconditional acceptance it needs to grow into its own unique form can often seem like an impossible challenge, especially if we are not used to doing it.

As an art-maker for more than 40 years I can empathize with anyone facing this daunting challenge. As someone who had the unusual good fortune to work with Joseph Campbell and his wife, the choreographer, Jean Erdman for 20 years I was constantly nourished by his wisdom and her example of how to meet the challenges of an artistic life.

In “Betwixt the Cup and the Lip”, one of eight articles in The Ecstasy of Being, the latest collection of his posthumous writing, Joe wrote:

“It is a basic principle of aesthetics that art is produced not out of fear, or out of hope, but out of an experience transcending the two, holding the two in balance, and revealing the wonder of the world-harmony that keeps in circulation (whether life be sorrowful or gay) the spheres of outer space, the electrons of the atom, and the juices of the living earth. “

So, the first job of the art-maker must be to put aside fear of failure, or hope of success and simply to experience the transcendent act of art-making. And what is involved in this “act of making”? The techniques, or specific activities of art-making are different, of course, for each form of art, and yet they all share an underlying commonality. As producer Jedadiah Wheeler so cleverly implied in 1987 when he coined the name “Serious Fun” for Lincoln Center’s summer performance festival, art-making involves nothing more and nothing less than the mystery of play, the very same play we are so charmed by watching lion cubs, wolf pups and human toddlers.

And once again, as Campbell said in 1950 in “Symbolism and the Dance Part I”:

“Animal exuberance, this mystery of play, is very close to (if not identical with) the basic impulse of genius in the arts. The power of great art to purge us—to release us, for a moment, from the jungle-melancholy of hungering, frightened, or drearily bored mankind—derives from its transcendence of the usual biological emotions. Released from fear and appetite, and fascinated by a game, we lose our egocentric emphasis and discover suddenly, with an emotion of joy, that we can participate, in a spirit of free and charming geniality, with others—neither on their terms nor on our own, but in terms of a new and disinterested harmonization. Moreover, just as this delicious spirit of play is what is most human in the animals, so is it precisely what is most godlike in man. That is the meaning of the Indian image of the Cosmic Dancer. Siva does not create the world because of any hunger on his part, or any fear—any economic or political necessity—but in divine spontaneity: the universe, with all its beings, is the shimmer of his dancing limbs. And each of us is Siva in so far as he can live life as a dance.”

And each of us can be an artist in so far as he, or she, can release into the spirit of play, even for a short amount of time on a regular basis The outcome, the product, of this play need not concern us, especially not at the beginning.  The transcendence, the joy, is in the act of making.

Want to read more of The Ecstasy of Being?

With all best wishes,

Nancy Allison is a New York-based performer, choreographer, filmmaker and book editor. Her choreography has been presented by the Athens Festival in Greece, House of Composers in Russia, and Lincoln Center Out-of-Doors Festival among others. Her award-winning films have screened at festivals throughout the world including the Venice Film Festival (2017), International Festival of Films on Art in Montréal (2016) and Film Society of Lincoln Center’s Dance on Camera Festival (2015). She is the executive producer and featured dancer of the three volume video archive Dance and Myth: The World of Jean Erdman (Foundation for The Open Eye 1993) and artistic director of Jean Erdman Dance for whom she stages Erdman’s classic modern dance repertory throughout the US. She is the editor of The Illustrated Encyclopedia of Body-Mind Disciplines (Rosen 1999) and The Ecstasy of Being: Mythology and Dance (New World Library 2017).