MythBlast | El Niño Dios, the Goddess, and the Cross 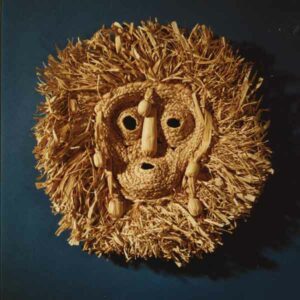 Cornhusk mask of the Seneca (Iroquois) “Bushyheads” or Husk Face Society. The masked members appear at the Midwinter Festival to dance among the people and, remaining mute, beg for food (Photo copyright © Museum für Völkerkunde, Munich. Used with permission.)

There is nothing more mythic than the ceremonies and stories that have gathered around the winter solstice. They are powerful metaphors that are present across cultures, irrespective of time and places, with the vastness of the skies as their native home.

It is no accident that the solstice continues to reflect the highest value for the human soul. The transcendental significance of the season persists even when this astronomical aspect seems lost in the decked halls of consumerism and electronic mass media. Both inside and outside the United States, people continue to relate to the land in its primordial agricultural aspect. To them, this astronomical event is not only a decorative item but a matter of vital significance.

If we take a broader view of our side of the hemisphere, going south of the border across Mexico to the Guatemalan Highlands, the end of December is a time of year-end festivities for the Maya peoples who, like all Mesoamericans, celebrate their ancient religion beneath the mythic garments of Christian rites and symbols. Beneath the conventional religion, something deeper stirs in the native soul; a subterranean stream of archetypal ideas and images continues to flow in, through and around Roman Catholicism. So the winter solstice is not simply a celebration of the birth of Christ, but also of El Niño Dios, (the Child God), who appears together with the Feathered-Serpent Goddess of Maize.

As a child growing up in Nicaragua, I still remember being struck by the processional “Christmas” parades which featured El Niño Dios accompanied by all manner of saints and virgins. It was a crowded street filled with the spectacle of sacred figurines and mythic people riding on elaborate floats. Beside the float bearing a life-sized figure of El Niño Dios, a second chariot bore a half-naked woman standing erect with arms outstretched and tied to a cross. She was carrying signs of the Feathered Serpent—a combination of feathers, make up, and lizard skins, surrounded by offerings of corn and other signs of agricultural abundance.

Even before I was nine years old, I knew that all these mythic figures somehow belonged together, although no explanation was given to me in official Catholic doctrine. I had a distinct feeling that these figures belonged together: the Child God, the Virgin, the Cross, and the naked Goddess of the Corn. Their coexistence inspired a strange sense of awe and fear, mixed with erotic excitement, which I could hardly explain to myself as a young child. What I knew, and knew with deep conviction, however, was the love of my family and friends, together with the pride of belonging to these “People of the Corn.” So it was in my childish imagination, then and to this very day, that the odd constellation of mythic figures, the Child God along with the naked Goddess of the Corn, were engraved in my soul as the “true” meaning of Christmas. And even then, I had a sneaking suspicion that the mystery of sexuality was also mixed up in it—just like everything in the adult world!

Indeed the celebration of the winter solstice has everything to do with an upsurge of productive and reproductive energies, the celebration of the fertility and bounty of the land, the public enjoyment of rivers of milk and honey. There is no doubt that in such gratifications of the collective spirit, the power of the mythic image is truly alive. As Joseph Campbell never tires of saying:

“The life of a mythology derives from the vitality of its symbols as metaphors delivering, not simply the idea, but a sense of actual participation in such a realization of transcendence, infinity and abundance.…” (Joseph Campbell, The Inner Reaches of Outer Space, xx).

The winter solstice is indeed such a realization of transcendence in the world, a materialization of its abundance and infinite grace. It is a kind of spiritual-material reward that was originally reaped by our parents and ancestors on the ground of organized human life. It commemorates a communal enterprise animated by a fundamental sense of solidarity and neighborly love which extends to all living things. Far from being a celebration of private wealth and power, which at best can only simulate a spurious form of transcendence, living myth is the reaping of the collective “blessings” that come from being a member of a productive society working for the benefit of all.