MythBlast | From the Great Mother to the Age of Belief: Campbell on the Mythologies of Europe & the Middle East

Over the last several months, we have been sharing MythBlasts with you: tastes of a mythic idea framed in not only Joseph Campbell’s work, but together with historic and contemporary mythologists. We are so glad to be getting such a great response from them! This month, we are pleased to announce a new shape for one MythBlast a month: a direct taste of some of Campbell’s writing, with a pointer as to where you can find more.  We are delighted to begin this series-within-a-series with a taste from Campbell’s masterwork of comparative mythology and symbolism, his Masks of God book series, from the new eBook version of Occidental Mythology.

I think that one of the treasures in this book is Campbell’s rich work on the presence of the Goddess across early Occidental mythology. She appears when you least expect her.

Here Campbell begins to weave the archetypal image of the serpent and its connections to the Mother Goddess, as well as its emergence in the Adam and Eve stories Occidental Mythology, from a chapter entitled “The Serpent’s Bride,” from the section, “The Mother Goddess Eve.”

No one familiar with the mythologies of the goddess of the primitive, ancient, and Oriental worlds can turn to the Bible without recognizing counterparts on every page, transformed, however, to render an argument contrary to the older faiths. In Eve’s scene at the tree, for example, nothing is said to indicate that the serpent who appeared and spoke to her was a deity in his own right, who had been revered in the Levant for at least seven thousand years before the composition of the Book of Genesis. There is in the Louvre a carved green steatite vase, inscribed c. 2025 B.C. by King Gudea of Lagash, dedicated to a late Sumerian manifestation of this consort of the goddess, under his title Ningizzida, “Lord of the Tree of Truth.” Two copulating vipers, entwined along a staff in the manner of the caduceus of the Greek god of mystic knowledge and rebirth, Hermes, are displayed through a pair of opening doors, drawn back by two winged dragons of a type known as the lion-bird.” 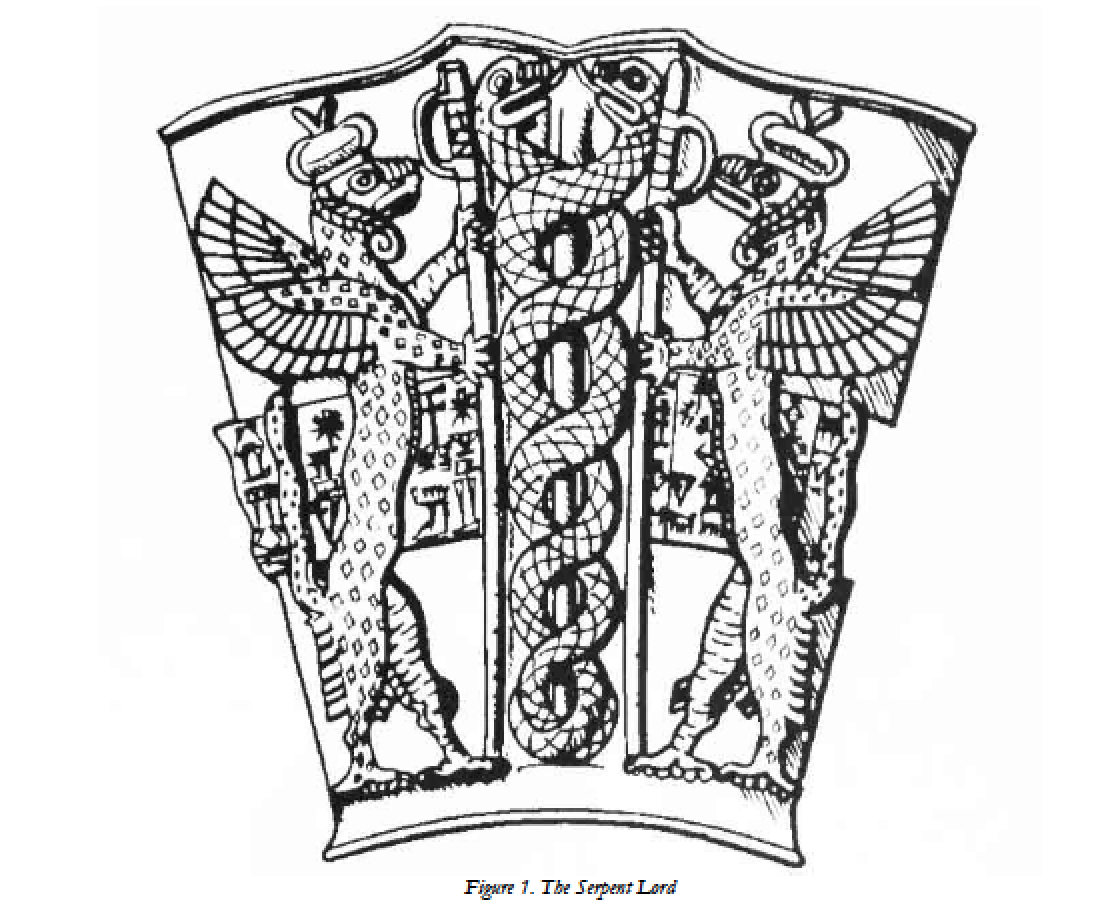 The wonderful ability of the serpent to slough its skin and so renew its youth has earned for it throughout the world the character of the master of the mystery of rebirth — of which the moon, waxing and waning, sloughing its shadow and again waxing, is the celestial sign. The moon is the lord and measure of the life-creating rhythm of the womb, and therewith of time, through which beings come and go: lord of the mystery of birth and equally of death — which two, in sum, are aspects of one state of being. The moon is the lord of tides and of the dew that falls at night to refresh the verdure on which cattle graze. But the serpent, too, is a lord of waters. Dwelling in the earth, among the roots of trees, frequenting springs, marshes, and water courses, it glides with a motion of waves; or it ascends like a liana into branches, there to hang like some fruit of death. The phallic suggestion is immediate, and, as swallower, the female organ also is suggested; so that a dual image is rendered, which works implicitly on the sentiments. Likewise a dual association of fire and water attaches to the lightning of its strike, the forked darting of its active tongue, and the lethal burning of its poison. When imagined as biting its tail, as the mythological ouroboros, it suggests the waters that in all archaic cosmologies surround — as well as lie beneath and permeate — the floating circular island Earth.

“In the next seal, Figure 5, where the bounty of the mythic garden is shown, all the personages are of the female sex. The two attending the tree are identified as a dual apparition of the underworld divinity Gula-Bau, whose classical counterparts are Demeter and Persephone.  The moon is directly above the fruit being offered, as in above the cup. And the recipient of the boon, who is already holding one branch of fruit in her right hand, is a mortal woman. Thus we perceive that in this early mythic system of the nuclear Near East — in contrast to the later, strictly patriarchal system of the Bible — divinity could be represented as well under feminine as under masculine form, the qualifying form itself being merely the mask of an ultimately unqualified principle, beyond, yet inhabiting, all names and forms. Nor is there any sign of divine wrath or danger to be found in these seals. There is no theme of guilt connected with the garden. The boon of the knowledge of life is there, in the sanctuary of the world, to be culled. And it is yielded willingly to any mortal, male or female, who reaches for it with the proper will and readiness to receive.” 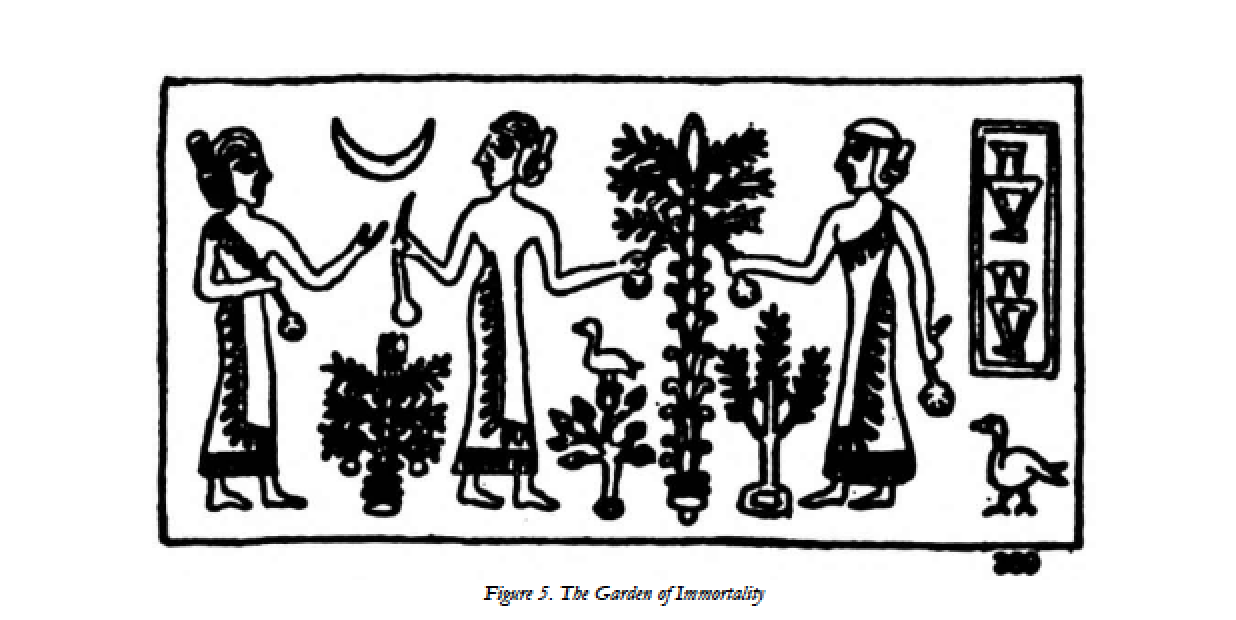 Want to read more? Just click the button to learn more about the Masks of God series and download the eBook of Occidental Mythology.