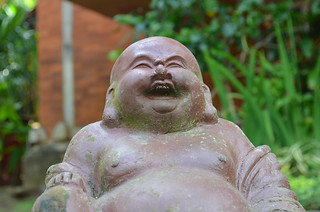 The classic characters and narratives of Greek mythology sculpted in stone throughout antiquity display a wide range of human emotions and psychological motifs. One particular expression, however, is often curiously absent – laughter. While laughing Buddhas and images of a jovial Kālī are common in Eastern mythology, most images of Dionysus show barely a hint of a smile. In his Republic, Plato warns that “if anyone represents men of worth as overpowered by laughter we must not accept it, much less if gods” (Book III, lines 388e9-389a1). Even many statues of Gelos, the divine personification of laughter in Greek mythology, are themselves without mirth. While there are likely simple cultural and logistical explanations for this, Joseph Campbell spoke to the romanticisation of the stoic and painful in The Hero with a Thousand Faces. He states: “Modern literature is devoted, in great measure, to a courageous, open-eyed observation of the sickeningly broken figurations that abound before us, around us, and within…Hence we are not disposed to assign to comedy the high rank of tragedy” (The Hero with a Thousand Faces,20). Campbell goes on to deconstruct the rejection, in some corners of society, of stories with happy endings. He laments the misunderstanding of these myths, fairy tales, and divine comedies, stating that in the ancient world such narratives were “regarded as of a higher rank than tragedy, of a deeper truth, of a more difficult realization, of a sounder structure, and of a revelation more complete” (The Hero with a Thousand Faces, 21).

Our era has had its share of tragedies, some of which have rivaled other historically profound devastations, and others whose profundity is amplified because of their accessibility through technology. The commodification of outrage and voyeurism has often clouded our current vision of what tragedy might truly be. Sensing this same issue in his own time, Campbell suggested that tragedy is the shattering of the forms and of our attachment to the forms ; but that comedy is “the wild and careless, inexhaustible joy of life and experience which includes them both and which they bound: the down-going and the up-coming” (The Hero with a Thousand Faces, 21).

This definition of tragedy seems especially pertinent with the recent fire at Notre Dame, which demolished the church’s iconic spire. Tragically, that familiar form was lost, and many of us experienced an attachment to that form that we were unaware we even had. While the bulb was shattered, the light emitting from those destructive flames reminds us that the mythological light within the form continues to shine even as the form gives way. The spire fell in its down-going, but those that recognize mythic patterns and seasons, understand that an up-coming is inevitable. In such moments, Campbell offers the words of Ovid in Metamorphoses, stating “All things are changing; nothing dies. The spirit wanders, comes now here, now there, and occupies whatever frame it pleases…For that which existed is no more, and that which was not has come to be; and so the whole round of motion is gone through again” (The Hero with a Thousand Faces,21). Are we capable of experiencing the joy of the up-comings with the same intensity we experience in the despair of our down-goings?  Have we afforded greater significance to our stories with tragic endings than those with happy endings? Mythic understanding helps us to recognize that the most profound narratives transcend endings altogether.

In his concluding thoughts on the issue, Campbell suggests that it is the business of mythology and fairy tales, to reveal the specific dangers and techniques of the dark interior way from tragedy to comedy. In a strange reverse play on the Persephone myth, some of us have taken up residence in the comforts of the darkness of tragedy, only maintaining a summer home in the world of comedy. May our heroic faces be those of laughter and smiles as often as they are of despondency and agony. For this is the way of the mythic life.