MythBlast | Life, Resurrection, and the Mythic Teachings of Frogs

A few nights ago, spring returned. In the Catskill Mountains of New York state, where I live, it’s a distinct moment, at dusk on the night when the spring peepers erupt into song. If you’ve not had the pleasure of experiencing peepers, they are tiny little woodland frogs that spend much of their lives living on the forest floor. Every spring, on the first warm night, they wend their way across leaf mold and even snow to find the nearest pool of still water.  And then they sing, with haunting shrill voices, loudly enough that if there are enough of them, you can feel your heart pound with the noise. 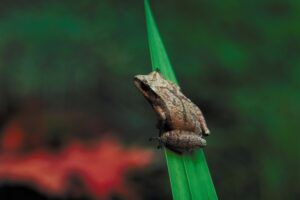 Frogs emerge in cultures across the world as symbols of life and fertility, fortune, resurrection, and magic. They are both familiar and deeply strange, of both water and land, with faces and fingers that look, at different moments, both oddly human and oddly alien.  We are fascinated by them, at times squeamish of them, and at times amused by them. In the case of the Frog Prince, we may agree to kiss them, as the good little princess of Disney versions does, or hurl them against the wall in a last ditch effort to retain our autonomy as the not-so-good little princess of the Brothers Grimm version does. Or, in the Hindu version of frog and royalty, we may look on in horror as the frog maiden Bhekî’s king husband does when he gives her the water she told him never to give her, and she disappears, like the sun at night, back into the water where she was birthed.

In Egyptian mythology, the Frog Goddess Heqet is a creator of life as the force that brings life into the womb, mirroring the regenerative life of the Nile as it blew past its banks each spring, bringing with it not only water and rich soil, but thousands of spring frogs. She was the patron of midwives, who called themselves ‘Servants of Heqet’ and protector of women giving birth, who often wore amulets of her as they went into labor.  But not simply a fertility and birth goddess, Heqet became a symbol of resurrection as she breathed life into Horus at the moment of his birth and his father Osiris’ death at the hand of his brother in the central myth cycle of Egyptian culture.

Frogs are creatures of metamorphosis, beginning from egg to tadpole with tail and gills, and then on to frog with legs and lungs as they move from their watery womb birthplace onto land.  What an extraordinary process to muse on, and to break open our imaginings of how we may shift in our life times, finding fluid fluency in our shifting understandings of ourselves and the world around us. And in winter frogs hibernate, but it is no simple sleep of a tucked-in bear dreaming of summer berries. Instead, frogs freeze solid as rocks – a trick of glucose and ice crystals forming outside cells – and when they thaw on an early warm spring evening, make their way across the forest floor and find a pond or vernal pool. Literally and metaphorically, frogs rise from what looks and feels like death to sing spring into being.

I hope you have a chance to hear the peepers this spring, and as you listen, hope that you might take a moment to imagine how the frog might sing of resurrections in your own life and world.

For Joseph Campbell’s exploration of the story of the Frog Prince, you can find him working this tale in a lecture with students on Lecture 11.1.5: Shift to Western Mythology. Enjoy!