Why do we tell stories about quests?

In traditional, warrior cultures, such tales make a certain practical sense: they’re a way to give a sense of purpose to young men who have nothing to do except wait around until it’s time to fight someone else. 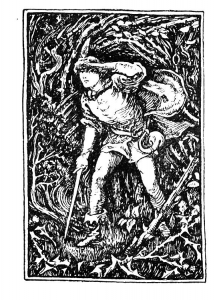 But that doesn’t explain why such stories still have a hold on us. Why are we drawn into stories about adventures? Why the fascination with journeys traveled by characters like Harry Potter or Katniss Everdeen (in the Hunger Games books) or Elizabeth in The Crown or the fabulously named Chiron in Moonlight?

Joseph Campbell would tell us that these are all hero journeys, following the schema that he laid out in his ground-breaking book The Hero with a Thousand Faces. His claim was that this story structure is all but literally hard-wired into the human brain — that we tell stories this way because stories that follow this pattern — or acknowledge the pattern before breaking it — release transformative psychological power.

But that still begs the question: what, psychologically, do these stories do for us?

There are many theories on this subject. Artists often are less concerned by the psychological or physiological causes for the power of the hero journey cycle, and more concerned in the fact that it does work to create transformative experiences. Publishers and film producers and video game companies are simply happy to know that the Hero Journey cycle works to make cash flow in their direction.

Yet we still wonder: aside from some accident of neurological structure, where do these stories of quest and adventure come from?

One possibility is that it is a symptom of basic human psychology.

In life as humans have lived it since we started settling into towns and cities, none of us is ever truly able to experience the full spectrum of the life that we can live. To use a 1960s term that my parents would approve of, we aren’t ever able to fulfill our human potential. We make choices — or our psyches push us in certain directions — and those paths we walk close off other paths to us.

If we are fortunate, we are at least content if not happy with those paths. If we are less fortunate, all of our hopes and desires come to be frustrated and disappointed.

In either case, there comes a time in every life when the world in which we walk — the choices in which we have hemmed ourselves — comes to feel barren. To use Campbell’s term, our life begins to feel inauthentic. We are in the Waste Land.

Whatever part of our own psyche we have allowed to lie fallow or whatever dearly held wish has been withheld from us, that now becomes the boon, the treasure that we seek.

In reading books or watching movies (or playing games or riding waves or…) we quest for that which we have lost: ourselves.