MythBlast | Play and The Ecstasy of Being in Times of Sorrow

Animal exuberance, this mystery of play, is very close to (if not identical with) the basic impulse of genius in the arts. The power of great art to purge us—to release us, for a moment, from the jungle-melancholy of hungering, frightened, or drearily bored mankind—derives from its transcendence of the usual biological emotions. Released from fear and appetite, and fascinated by a game, we lose our egocentric emphasis and discover, suddenly, with an emotion of joy, that we can participate, in a spirit of free and charming geniality, with others—neither on their terms nor on our own, but in terms of a new and disinterested harmonization. Moreover, just as this delicious spirit of play is what is most human in the animals, so is it precisely what is most godlike in man. (The Ecstasy of Being, 2017, p. 43)

I set out to write a frothy MythBlast today, enchanted by Campbell’s ideas about play and art in one of his essays in the exquisite new collection, The Ecstasy of Being.

And instead, I am transfixed, gazing at photographs of neighborhoods I called home for fifteen years being evacuated and burned in the fire that is raging today in Ventura County, California. Places, wildness, and the lives of people that I have loved are burning to ash. This fire has become a fierce echo of the fires that ravaged in California earlier this fall, and in Canada, in Spain, in Portugal, in Greece, in Chile, and even in Siberia over this last year.

What point is play in this moment? Is it simply absurd to think about in the face of such sorrow? Is it somehow irresponsible or irreverent to even consider the act of play when there is so much hardness in the world? Is it the worst form of escapism, choosing to step away from compassion (co-suffering, in its earliest etymology), to seek out lightness? 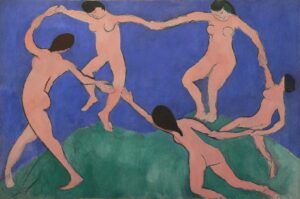 Then I read Campbell’s line about the power of art to release us, to purge us, of the fears and despair in our lives. Even for a moment.

And I find myself reaching for that sense of joy in creative play, in hopes that it can help us find breath as we each deal with our sorrows. There is, I believe, its mystery, its power, and its invitation to remember joy even in pain. There is the ecstasy of being.

•••
Our publishing partner New World Library is offering 50% off their entire inventory this holiday season, including their Joseph Campbell Collection, featuring books like The Ecstasy of Being, Hero with a Thousand Faces, Goddesses, Pathways to Bliss, Asian Journals, and more. Enter the code FRIENDS at checkout on www.newworldlibrary.com by 12/20 to save.