MythBlast | Ramadan: The Empowerment of Self Restraint

Ramadan, celebrated this year between May 27th and June 24th by approximately a quarter of the world’s population, is the ninth month of the Islamic calendar and commemorates the revelation of the Quran to the Prophet Muhammad. Ramadan’s most marked characteristic is the daily dawn to dusk fasting, the length of which is determined by one’s location and the time of year. For instance, the days of fasting get longer the nearer to the summer solstice and shorter as winter approaches. And this year, if you live in say, New York, you’ll rise around four in the morning and eat a breakfast hearty enough to get you through the day without additional food or water until the sun sets around 8:15 p.m. Iftar, the breaking of the fast, is a ritual often shared with family and friends indulging in dates, water, and sweet tea along with other favorite traditional meals often served buffet style to family and friends. The “night of power,” or Laylat al-Qadr, is the holiest night of the Muslim year, commemorating the night Muhammad received his revelation, and falls on an odd numbered night during the last 10 days of Ramadan. 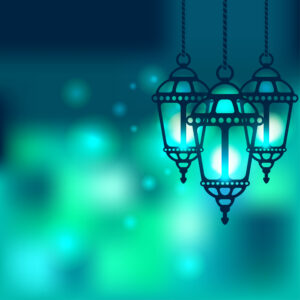 Of course, there is so much more to the celebration of Ramadan than the bare, simplistic introduction I have just provided, but I’d like to focus on one aspect of Ramadan in particular, the ritual of self-restraint through fasting. Participating in mythic rituals is a powerful way to more deeply understand the condition of being human and the challenges inherent in human development. C.G. Jung and Joseph Campbell believed that archetypes are among the constituent elements of the human psyche and, in addition to being reflected in myths, the rituals accompanying mythic narratives allow for a more conscious interaction with, and an examination of, the powerful energies of existence swirling around, in, and through individual lives.

I believe it’s important not to mistake the ritual itself as the fulfillment, or the point of the myth. Enacting rituals is not simply a mandated, legalistic obligation of a myth but rather, rituals are a didactic, metaphoric, self-educating act of deepening and expanding one’s consciousness so that one may more fully grasp what it means to be a human being related to one’s self and other humans, to other animals, and to one’s world. So how then, do we begin to understand ritual acts of self-restraint such as fasting? Typically, when one initiates a fast, a condition of need quickly occupies one’s attention: lowered blood sugar makes one feel weak and perhaps a bit shaky, confusion and irritability are common and one often feels restless. Dehydration from a lack of water makes one’s mouth dry and begin to feel sleepy and headachy. It begins to become unpleasantly clear how difficult and complicated a proposition it is to sustain ourselves; we see that we are clearly dependent upon others for our own well-being. And as our instinctual needs mount how challenging is it to remain compassionate and humane–are we still able to be kind to our children and spouses, patient with the demands of others, and sympathetic to those who are forced to live on a daily basis with hunger, oppression, disability, desperate longing, and a host of other challenges, without the same resources and good fortune that most of us reading this essay enjoy?

Fasting humans are not fighting humans; one simply hasn’t the strength, energy, or cognitive sharpness needed for conflict, and one’s energies may be more easily tuned toward reconciliation and the search for peace. Self-restraint creates the conditions under which humans may recognize and strengthen our best selves, try to relieve oppression and fear, and since we have ourselves tasted a bit of the diminishing, perhaps even dehumanizing effects of privation, we may be inspired to relieve others of the burden of need and comfort the afflicted.

You can read some of Campbell’s thought about the role of ritual in culture and psyche in our newly-released eBook Thou Art That: Transforming Religious Metaphor.