If you peel back the frivolous mask of a holiday that inspires $8.4 billion in candy; decorations; and costumes sales for little kids, grownups looking for a moment of escapist fantasy, and long-suffering pets; you’ll find a swirling memories of much a darker, more magical dancing with ideas of life and death.

Since the Iron Age (about 600-800 BC) Celtic cultures have been marking Samhain, the end of the year at the death of summer, and an opening, if only for a day, into the world of the ‘other,’ of long-dead ancestors, lost loved ones, and the energies that sit outside of bright daylight’s logical understanding. Imagine, for a moment, living in a culture when the last harvests, cattle driven down from high summer pastures and slaughtered for winter, mark the end of the abundance of summer, and the cold darkness of winter lies ahead. It is a liminal time – liminal from the Latin for ‘threshold’ – a doorway into how humans wrestle with mortality, and both our fascination with and dread of death. 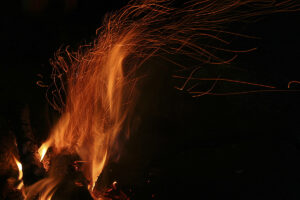 Roman writers describe wild festivities (as they often did about the Celts and Gauls; pursed-lip morality about pagans being a fairly common thread in Roman writings) around the ritual bonfire.  What captures my imagination about their writings about Samhain, though, are the descriptions of Celts donning the skins of slaughtered livestock as central to their rituals, to honor, propitiate, and connect with those animals.

With this image, the costumes of a contemporary Halloween suddenly seem to have far richer meaning, far deeper than the mumming and guising traditions of Celtic countries and their offspring, our fairly benign, secular, “trick or treat” nights out along suburban streets.

In “Art as Revelation,” Campbell describes the work of “sympathetic magic” – evoking and invoking the spiritual world by adopting its personae. He quotes Abbe Henri Breuil, describing Paleolithic cave art:

“These are hunting or ceremonial masks, or either ghostly or mythical beings. The man with a mammoth’s head, the one with a bird’s head, and all the other masked beings, here or elsewhere, are perhaps hunters in disguise, ready to start on their expeditions. More probably they are members of the tribe performing some magic rite, or mythical beings from whom favors must be requested and who must be conciliated.” (114)

When we don the costumes of the mythical world, we imaginally enter into a relationship with the archetypal energies we are wearing. As I muse on how Stone Age peoples and Iron Age Celts sought connection with this magic, I find myself wondering if we are as far removed from this instinct as we assume.

As you slip on a costume or mask this Hallows Eve, what sympathetic magic are you conjuring? Could you be inviting or perhaps protecting yourself from the archetypal energies you are wearing?

For our treat this Halloween, in honor of our growing community on the Joseph Campbell Mythic Salon on Facebook, you can download “Art as Revelation” for free!

Click here and follow the instructions about the coupon code after you load your cart and check out.