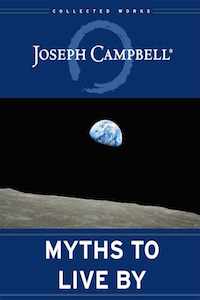 One of my favorite quotes by Joseph Campbell, in Myths to Live By, refers to Love as the burning point of life. When he elaborates, what we come to understand is that life is sorrowful, and so is love. And there you have it, the essence of romantic love is found in its duality as both fiery passion and sorrowful experience.

Campbell tells us that in order to understand love, we must turn to the Troubadours of the twelfth century who sang and practiced l’amour courtois or courtly love, which is to say romantic love, the meeting of the eyes between two people. In Medieval Europe, marriage was a political and familial affair under strict oversight by the church. Women were commodities, property to be used in exchange for power or land or higher status in the society. But in the twelfth century, one woman endeavored to change that. Eleanor of Aquitaine (1122-1204 ce) wanted women to be treated with respect, not as property. She wanted change for herself and for other women. I believe l’amour courtois (courtly love) and chivalry were born out of this desire. The love of your beloved was akin to spiritual love. A man was meant to devote all of his most daring and chivalrous deeds to her who was not his wife, but the romantic ideal of his heart. That is what made him truly a knight. 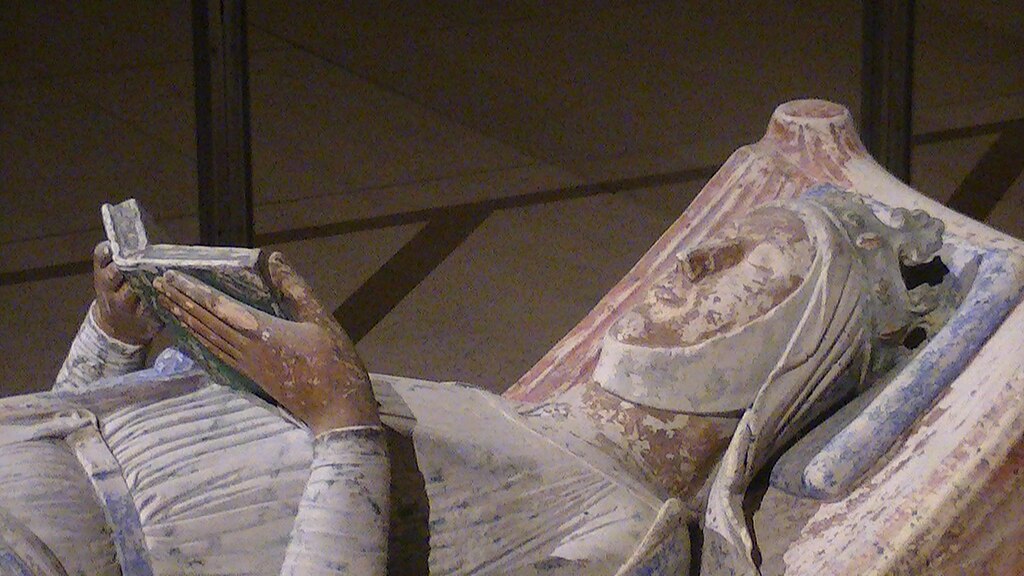 Effigy of Eleanor of Aquitaine in the church of Fontevraud Abbey
(Photo by Adam Bishop, 2011; used through a Creative Commons license)

Eleanor herself was a remarkable woman who chose her destiny, becoming queen of France, then had her marriage annulled (unheard of in those times, as women were either gotten rid of by poison, or sent off to a convent), and helped Henri de Plantagenet, Duke of Normandy, become king of England, and she his queen. She brought the ideal of romantic love to both courts, and outlived both her husbands and most of her sons. She was a woman for the ages. She was a transgressor on behalf of women and in the name of love. 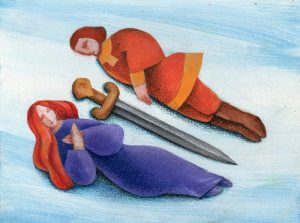 In a story from the same period, Joe Campbell saw the romance of Tristan and Iseult as one of the great archetypal stories of romantic love. It is also, however, a story of transgression. When Tristan came to fetch Iseult to be married to King Mark, the two fell in love. Their love was considered treason, blasphemous and punishable by death. Tristan’s reaction when he learned his fate was to say, “This agony of love is my life and I accept death, I accept burning in the eternal fires of Hell if need be for that love” (Gottfried of Strassburg, Tristan, 165)

Taking this lesson one step further, when we choose to love the one we were taught to hate, we change the world. How about an Irish Catholic loving a Protestant or a Palestinian loving an Israeli? How about a black man loving a white woman in the South in the sixties or an Orthodox Jew loving a Muslim? One of my own students, a beautiful and smart young woman is the result of such a love. Love is the greatest agent of change, it is the heart of change, and it often represents a betrayal of the old order. Fairy tales often refer to this transgression as “opening the forbidden door.”

From the abolition of slavery to the civil rights movements to LGBTQ+ rights, if men did not love each other, if women did not love each other, if people of different races did not fall in love with each other, change would not happen. Couples throughout history have broken down barriers and changed the laws that oppressed groups of people.  Richard Loving and Mildred Jeter Loving were such a couple. They wanted to marry and live in their home state of Virginia. The case of Loving ( what a perfect last name!) v. the State of Virginia (1967) is a landmark civil rights decision of the United States Supreme Court which invalidates laws prohibiting interracial marriage. To me, it represents the heart of the civil rights movement and the need to transgress against laws and rules that violate the rights of human beings.

Love has contributed to change in all areas of our lives. Parents fighting for their disabled children’s rights changed things. Catholic and Protestant mothers marching together, out of love for their sons and daughters in Ireland, changed things.  People loving the Earth have changed things. When we dare to love, we expand our field of awareness to encompass something other than ourselves. We grow as human beings. When we love another enough to remind them of who they truly are, we shine a light that can heal the world.

As Norwegian novelist Arne Garborg put it, “To love someone is to learn the song of their heart and sing it to them when they have forgotten.”