American poet T.S. Eliot opens his masterpiece The Wasteland with a section titled “The Burial of the Dead”:

What did he mean by that opening phrase?

When we think of April, we (in the Northern Hemisphere, at least) think of spring at its most glorious: new life rushing forth, covering “the dead land” in fresh, green life. 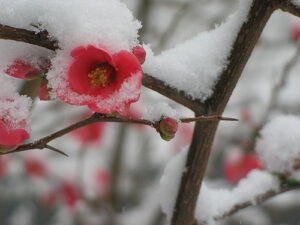 Yet Eliot, gloomy modernist and mytho-poet, is looking at the agony of rebirth. The birth of the new, after all, reflects the death of the old. The snows recede, revealing dead, cracked earth below, while the spring rain stirs the “dull roots.” His poem makes it clear that life in the Waste Land — dead, blanketed in the snow of oblivion — has the advantage of being, at the very least, painless. As any mother can tell you, and as any newborn could reaffirm if given the power of speech, birth is a painful process.

Eliot wasn’t just being gloomy when he called that section “Burial of the Dead.” Not just.

While celebrations of spring in today’s culture generally are fairly benign, featuring dancing children, sales on garden supplies, and brightly colored bonnets, festivals of the season traditionally had a matching darker side. Tradition tells us that the today’s Queen of the May may be a folk memory of ritual human sacrifice in earlier times.

Two of the major religious festivals of the season reflect this ambivalence. Both Passover and Easter are joyous, life-affirming holidays. And yet at their hearts, they concern a sacrifice. In the Jewish festival, a burnt lamb bone represents both the lambs whose blood was used to mark the doors of the Hebrews and the dead Egyptian first-born whose doors were not so marked. The Christian festival — which consciously borrowed from the symbolism of Passover — makes the crucified Jesus that lamb whose blood redeems humanity.

In talking about these holidays, Joseph Campbell pointed this out:

Passover and Easter, then — the ultimate springtime festivals in the Jewish and Christian faiths, the ultimate April holidays — are at their hearts rites of death and rebirth. Just as the stories that follow what Campbell called the Hero’s Journey include at their hearts the symbolic or actual deaths of the heroes, these festivals invoke an explicit and transformative encounter with Death.

In order for the new to be born — the new season, the new spirit, the new generation — the old must pass away.

And that’s why April is the cruelest month.

For more on Easter and Passover and the celebrations of spring, read Joseph Campbell’s Thou Art That.