MythBlast | The Flight of the Wild Gander: The Teacher as Midwife 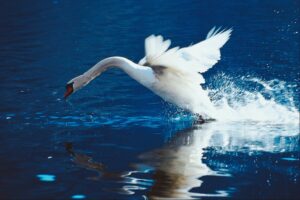 The Joseph Campbell Foundation and New World Library are, later this month, releasing The Flight of the Wild Gander, one of Campbell’s most important, and popular, collection of essays. In these essays, Campbell is at his pedagogical best, his esurient intellect leading readers into, not just scholarly revelations, but affectively thrilling emotional revelations as well. The Flight of the Wild Gander is an example of Campbell at the height of his intellectual and scholarly powers, and one of my perennial favorites.

One of the essays contained in The Flight of the Wild Gander is “Bios & Mythos,” an essay exploring Campbell’s notion that mythology is not simply a psychological product of human cognition (and now available as an e-pub from JCF for $.99), but in fact, has its basis in physical, biological exigencies. Human animals, according to Campbell, are born staggeringly premature; at least twenty years too early, and perhaps as much as, referencing George Bernard Shaw, seventy years too soon. Quoting Géza Róheim, Campbell explains how a prolonged human infancy is traumatizing in ways that other animal species, even other apes, don’t experience. We humans are terribly dependent creatures over an inordinately long time, and as the result of such a dependency accompanied by its distorted illusions, defenses, and narratives, we must be subjected to a “second birth.”

What, then, constitutes this second womb from which we must emerge? In “Bios & Mythos,” Campbell writes that it is “Rites, then, together with the mythologies that support them, [which] constitute the second womb, the matrix of the postnatal gestation of the placental Homo Sapiens.” Tradition, ritual, and myth is the second womb we occupy, and to emerge healthy, hale, and whole from this womb, we need extraordinary teachers acting as the cool, calm, experienced midwife. The “wild gander” in the title of Campbell’s book is a reference to just such a teacher. The Hindu honorific, Paramahamsa, which literally means supreme swan, i.e. Campbell’s gander, is given to teachers who are regarded as having achieved enlightenment. The hamsa, swan or wild goose, is recognized for its characteristics of grace, stamina, aesthetics, and commitment; qualities that all the best, most skillful teachers possess. Legend has it that the swan is the only animal capable of separating, once mixed, milk from water, an act symbolizing a profound ability for spiritual discrimination. The second birth is not without its hazards. Campbell notes,

Misbirth is possible from the mythological womb as well from the physiological: there can be adhesions, malformations, arrestations, etc. We call them neuroses and psychoses. Hence we find today, after some five hundred years of systematic dismemberment and rejection of the mythological organ of our species, all the sad young men, for whom life is a problem (ibid).

All the sad, lost, even nihilistic, young people are as they are for the want of skillful, generous, committed teachers—midwives—who themselves have learned to navigate swan-like the often treacherous waters of life gracefully; those who themselves are twice born, fluent in ritual and mythic life, and willing to help make sense of the seductive, terrifying, and powerful symbols, images, and narratives constituting the second womb; those teachers who inspire us to fly higher and farther than we ever could have imagined.