MythBlast | The Sagacity of Fools

April 1st, April Fool’s Day, is a day traditionally set aside for playing tricks on people or hoaxing. Pranks and hoaxes range from the very clever, like the BBC’s “spaghetti harvest” or an article in the April 1998 issue of New Mexicans for Science and Reason suggesting that the Alabama legislature had decided that Pi should be changed from 3.14 to 3.0 bringing it closer to the “biblical value,” to the old hackneyed pranks of gluing coins to sidewalks or floors or filling Oreos with toothpaste. Celebrations of hilarity and good humor date back to ancient Greece and Rome, but one of the earliest instances of specifically April foolery, poisson d’avril, dates back to the 15th Century and includes attaching a paper fish to an unaware victim’s back; a kind of medieval “kick me” sign. April Fool’s pranks may sometimes have a dark side, it seems, and may smack a bit of humiliation and a, well, smug manipulation of the credulous and the uncomplicated. 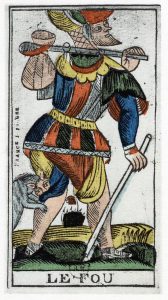 These two qualities in particular, credulousness and an uncomplicated simplicity, constitute the heart of the fool. In the plays of Shakespeare one finds any number of apparent simpletons who speak incisively and truthfully about the nature of life, of love, and of politics. Like Nick Bottom, fools are often possessed of a “most rare vision,” a vision that makes sense of a mixed-up world, a world that has been turned upside down by greed, cruelty, and fear. The fool, in his nonsense, his glibness, his often slapstick manner, is able to speak uninhibitedly and frankly to the truth, thus setting the world aright again. By identifying the foolish, society’s anxieties find an outlet in laughter as well as a welcome reassurance that one is not, oneself, a fool. But if one looks more deeply, one may find in foolishness a profound critique of the sociopolitical forces that conspire to make one foolish. The fool offers an effective critique of society because s/he understands existence experienced from the inside out rather than the societally sanctioned outside in. The fool is aware (and brings the fact into our awareness, too) that those who judge her have never deeply examined their own lives and have no way of understanding différance except to call it foolishness or asinine.

Beneath the fool’s unconventional, sometimes shocking, behavior, one finds a deep wisdom. Marie von Franz connected the fool with “…a part of the personality, or even of humanity which remained behind and therefore still has the original wholeness of nature” (Lectures on Jung’s Typology, 1971). In the Tarot deck, the fool is the first of the major arcana and bears the number zero. Zero first appeared in the early 2nd Millennium B.C.E. in Egypt, and only found its way to Europe in the 11th century. The concept of zero is a little mind blowing in that it presents the apparent paradox of nothing being something, a “nothing” that actually occupies space. Zero is a whole, rational, and real number that has power mathematically and denominatively, and even imaginally. When one considers zero’s circular shape, one naturally imagines ideas such as totality, wholeness, and a universal, all-encompassing vessel within which everything is in harmonious relationship with everything else.

A fool, then, is well suited to take on the task of revealing truth—a project so fraught with danger and misunderstanding that who but a fool would propose to do such a thing? And the workshop of the fool, the place in which he conjures his particular reconciling, healing magic, is the human heart; the undiscovered country at the center of the empty circle, zero. The fool’s genius works for all of us, helping us understand that hidden in what appears to be nothing, is a very important something. Apprehended in this way, the fool’s reply to King Lear makes perfect sense: “Can you make no use of nothing, nuncle?”

Thanks for reading, and best regards,