MythBlast | The Transparency of the New Year 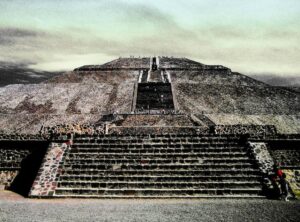 Many years from now, at the crossroads of our lives, our souls will want to remember the day our lives were given a fresh start. In such moments of reflection, the past, future, and present all seem to roll together as one. Like the mythical serpent that bites its own tail, giving birth and devouring itself at the same time, every ending turns into a beginning that is constantly renewing itself, delivering an end which never seems to stop.

Likewise, at the dawn of the New Year, we invite such reflections from the mythic dimension where the present holiday becomes transparent to the eternity of time.

From time immemorial, in the highlands of Mesoamerica, the spectacle of the winter solstice has offered precisely such a point of spiritual concentration and reflection on time. The very term for “sun,” “day,” or even “dawn,” is kinh, or k’ij for the highland Maya, a synonym for time itself whose glyphic form often appears as a kind of mandala “simulating a flower with four petals” (Miguel León-Portilla, Time and Reality in the Thought of the Maya, 18). 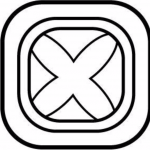 The k’ij or kinh is doubtless one of the central symbols of Maya mythology, expressing the all-encompassing nature of time in the consciousness of being. Eric Thompson saw in the eternity of Maya time “the supreme mystery of Maya religion, a subject which pervaded Maya thought to an extent without parallel in the history of mankind” (Maya Hieroglyphic Writing, 155).

The sun is thus the embodiment of the solar God Hunahpu in all its splendor, whose sweeping annual path, as Raphael Girard writes, “symbolizes the cycle of human life” (Esotericism of the Popul Vuh, 134), as well as entire Ages of Creation, “which are ‘suns’ in the cosmogonic text of the Popol Vuh” (León-Portilla 18). The course of the sun traces the descending path the Twin Heroes must take down to Xibalba, the Maya underworld, where they must endure the many trials of the Death Lords, including the sacrificial ball game at Crushing Ballcourt, before rising again triumphant as the resurgence of Sun and Moon reborn.

Thus the winter solstice, which the highland Maya call rakan k’ij or “sun’s reach” (B. Tedlock 180), brings together the image of the dying and resurrecting heroes at their “reach” with the symbol of time itself. The astronomical event is thus an apprehension of the noumenal sense of temporality itself, an experience of becoming and transformation, which is concentrated on a point of illumination that eternally renews itself.

The image of the Rising Dawn thus illustrates a fundamental insight that Joseph Campbell referred to as a decisive feature of true mythology: its transparency to the transcendent. As he writes with great emphasis in Inner Reaches of Outer Space: “for any god who is not transparent to transcendence is an idol and its worship is idolatry” (18). Yet it is rather obscure and difficult to say what exactly being “transparent to transcendence” really means, and it seems necessarily obscure and difficult, lest our description itself become “opaque to transcendence.” We must guard ourselves against the temptation of reducing the mysterium to something familiar and easy to grasp, which would turn it into an idol devoid of transcendence. This is a problem of communication that affects philosophy and mysticism alike. But this is also where the language of mythology may step in to bridge the gap between opposites in time.

The Maya used a dual calendric system for measuring and marking time. In their integrated temporal scheme, roughly speaking, “feminine” and “masculine” forms of time-consciousness continuously overlap. What the shamanic ajk’ij or “day [sun or time] keepers” (B. Tedlock, Time and the Highland Maya, 47) call a proper “Calendar Round” signifies a strict mechanical combination of the two systems. Like two interlocking gears of sacred temporality, the solar and lunar calendars must work in unison while expressing two fundamental senses or intuitions of time, each following its own order of being with the other.

On the one hand, a large 365-day solar cycle, known as the haab or macewal k’ij (“common days”), encircles the annual path of the sun and the collective rhythms of agriculture and seasonal change. On the other hand, a smaller 260-day cycle coils around a more internal and personal sense of time, where the psychic influences of that particular day and person are reckoned with and their meaning “sorted out.”

This is the role of the sacred divinatory calendar, which came to be known as the tzolk’in, and is “sacred” in the original sense of being set apart, that is, of being able to carve a personal space for the mythic dimensions of the collective psyche.

As a feminine form of time-intuition, the tzolkin is governed by Lunar and Venusian cycles which are themselves related to the length of human pregnancy and to the pregnancy of the land. It is no accident that the festival of the winter solstice happens exactly 260 days after the sowing of the sacred corn, which prepares the way to the miracle of the winter solstice. From this fact alone, however, it becomes clear that the solar or “masculine” framework of temporality, with its connection to civic life and the mundane work of agriculture, is not something external to the “feminine” timekeeping system of the tzolkin. In true dialectical fashion, each opposite is reflected inside the other as itself.

Thus the Maya Calendar Round, in its full totality, expresses a dialectical union of feminine and masculine forms of time-intuition, a doubly reflected form of consciousness which is already hard at work within each system. In the crucible of myth and history, the very structure of Maya temporality exemplifies the way opposites are thoroughly integrated in themselves when they become transparent to the transcendent, opening the gates of true myth and history—what the Maya call u hol gloriyah, the “glory hole,” or “Black-Transformer, the mouth of the White-Bone-Snake” (Freidel, Schele, Parker, Maya Cosmos, 51)—where the individual and the collective dimensions of the psyche are thoroughly interwoven with every step of the hero’s journey.