MythBlast | The Turn of the Pollen Path 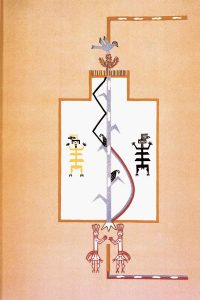 In his 1986 publication The Inner Reaches of Outer Space, Campbell turns to a Navaho sand painting of a Blessing Ceremony which depicts a rite of passage for the initiate. Campbell sees this painting as a specific illustration of a psychic process of transformation which is archetypal in nature; it possesses mythic structures shared among all peoples and cultures.

In the Navaho vision the sand painting represents a kind of gateway to another world, an attitude or mode of consciousness hitherto unknown to the initiate. The painting acts as a great transformer of psychic energy, channeling all its impermanence and sense of becoming. For the sand painting will dissolve after the ritual is done, thus showing in a most concrete way its thoroughly temporal sense of eternity.

In its purely formal structures the sand painting depicts the journey of a divided mind undergoing a profound shamanic psychoanalysis. As a kind of White Walker of the mind, the initiate enters the bottom right of the picture; their path leaves white cornmeal footsteps that reflect a mind divided against itself, an ailing mindset walking along a divided path. The color of the mind is lunar white, the color of the cornmeal footprints left along the Pollen Path.

As the counter-intuitive abstract unity of all colors, the whiteness of the footsteps represents a thinking mindset. It denotes a mode of consciousness already charged with spiritual intensity. The Navaho White Walkers stand for the ghostly consciousness of psychic existence, a mode of dialectical self-awareness which relates itself to itself in a doubling of the mind. The White Walker of the Pollen Path means the initiation of twin consciousness as the self-awareness of the psychic substance in its own  spectral dimension, a realm of pre-existence between the lines of being and non-being. 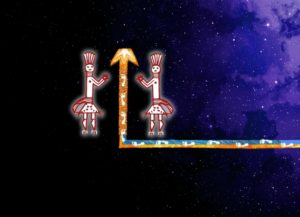 The walk of the Pollen Path involves a peculiar mode of thinking, a thinking with “naked feet,” which are allowed to step into the inner life of things. Walking over the red coals of solar feelings and the blue waters of lunar sensations, the White Walker of the Pollen Path learns to step between false alternatives and belief systems, and the pseudo-oppositions of thinking/feeling, which beleaguer the alienated state of the divided mind. Releasing itself from its own ideological traps, its own neurotic conflicts, the initiate gives way to the liberation of the Pollen Path.

The path of twin consciousness is a doubly reflected path wherein the energies of Sun and Moon intertwine. Instead of splitting the world into rigid dualisms, thinking and feeling, sensation and intuition, all walk hand in hand along the dialectical movement of the Pollen Path. The integration of all five ritual colors (red, blue, yellow, black and white) sets the mind, soul, body, and spirit within the cosmic background of Night.

In my digital recreations of the Navajo design featured here, I emphasize the dialectical relationship of the conscious elements of the painting against the vast unconscious background of cosmic space-time. 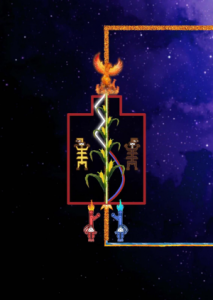 As Campbell also describes the mythic dimension of this painting:

Footprints of white cornmeal mark the path of the initiate throughout. As already noticed, they approach along a road that is of the two symbolic colors of the male and female powers, fire and water, sunlight and cloud, which at the place of the Spirit Bringers abruptly blend to one golden yellow of the color of pollen. (Inner Reaches, 71) 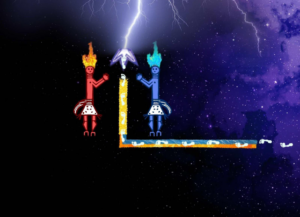 The Spirit Bringers ignite with lightning the process of psychic transformation. This happens at the turning point of the initiatory walk, where ascension begins. It is here where opposites become creative rather than destructive as they enter into a dynamic relationship which ultimately becomes a helical movement upwards which fructifies the corn plant.

The healing means a regeneration of the soul-body in order to effect change. Although there may be all kinds of intoxicating aids for this shift in every culture, as Campbell writes, the main point is that the “ordeal is an act of sacrifice” (Inner Reaches, 73).

What ultimately effects this mysterious “blend” of opposites, however, is not the simple agent of an “altered state,” which may be a passing phase or lapse of the moment. The ritual must not only be felt and intuited, imagined or played with as if it were a matter of make-believe. No, the ritual must be seriously lived through and internalized, existentially reflected in the very logic and syntax of our lives. As the real origin of psychic change, the walk of the Pollen Path exemplifies the unity of opposites in time, but it is the work of the walk itself that matters one day at a time.

As we saw, the emergence of the Pollen Path happens at the turning point where the Twins reveal themselves in their true nature as lightning strikes. It is a twin light of consciousness that appears to ignite the power of the mythic image as the source of a healing experience. Rather than being a “talking cure,” however, the Pollen Path is a cure by means of archetypal sight. It is the visionary way of the shaman, philosopher, and artist soaring into the depths of Night, in other words, “assuming an intentionally metaphorical, mythological cast of hierophantic personifications” as Campbell writes. (Inner Reaches, 70) 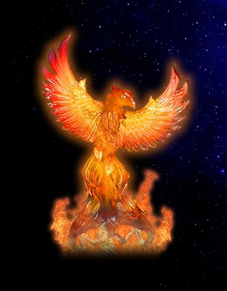 The need for an authentic sense of vision in order to bring about the desired healing effect cannot be over-emphasized. As Jung himself sternly remarked: “It is high time we realized that it is pointless to praise the light and preach it if nobody can see it. It is much more needful to teach people the art of seeing” (Psychology and Alchemy, page 13, ¶14). This is where myth comes in as the indispensable instrument of vision to light our paths—like the Phoenix reborn from the ashes of time.