MythBlast | The Use of Myth: The Power of the Fleeting Apparition 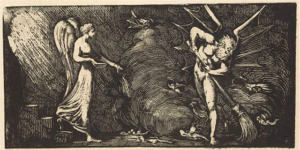 This week I want to continue the exploration of what, in her MythBlast last week, Dr. Melander called “the use of myth.” The uses of myth are as various as they are abundant, and exert influences in every aspect of human life, “galvanizing populations, creating civilizations, each with a beauty and self-compelling destiny of its own” (Campbell, Primitive Mythology, 4). Mythology and mythologies are very powerful things indeed. Myth has the power to acquaint one with the vastness and complexity of the universe, to inspire transcendent awareness, but it also has the power to shrink the universe and domesticate it—reduce it to a familiar, bounded space in which human beings live comfortably and, perhaps, smugly in the knowledge that the universe needs human beings (and special, chosen ones at that) in order for itself to exist.

Campbell recognized the dangers of literalizing myth and believing in it as though it were incontestable fact: “Clearly mythology is no toy for children. […] For its symbols (whether in the tangible form of images or in the abstract form of ideas) touch and release the deepest centers of motivation, moving literate and illiterate alike, moving mobs, moving civilizations.” He goes on to say, “For surely it is folly to preach to children who will be riding rockets to the moon a morality and a cosmology based on concepts of the Good Society and of man’s place in nature that were coined before the harnessing of the horse! And the world is now far too small, and men’s stake in sanity too great, for any more of these old games of chosen folk […]by which tribesmen were sustained against their enemies in the days when the serpent still could talk” (ibid, 12).

In his brilliant, provocative book Mythologies Roland Barthes, influenced by the semiotician Ferdinand de Saussure, argued that myth is “a system of communication, that it is a message. This allows one to perceive that myth cannot possibly be an object, a concept, or an idea; it is a mode of signification, a form” (109). For Barthes the message of myth consists of material (oral or written narrative, art, photography, cinema, musical, etc.) that has already been worked on, sometimes over many centuries, to make an incredibly effective communication. The message of myth signifies a particular state of consciousness with which one may explore, discuss, enter into, or dissect without attending to its substance (to be clear, that is not the same as saying the substance of a myth is unimportant). On this particular point, at least, Barthes seems to be in accord with Campbell in the sense that the form of myth insists upon metaphor, a communication more plastic, more flexible, more mercurial than literal, factual objects can be.

Myth is, for me at least, most meaningful when one explores the deeper messages the myths point to or suggest. Those messages don’t lend themselves to literal or factual understanding and we always end up by saying what they are like. This is not a shortcoming at all, and the immersion into the message is itself participation in the powerfully primal rhythms of life, our own as well as the life of the world. Ludwig Wittgenstein suggested that the limits of one’s world are defined by the limits of one’s language, and I sense that at one’s limits or edges, a protean potential for change and the realization of meaning is present. It’s the struggle of working at the limits or the edges of oneself, and one’s limited ability to speak about it, that unearths important awareness and deep truths.

To discover the true power of myth it must not, I believe, be worked within the confines of that which one finds comfortable, concrete, or understandable; those qualities never move us closer to boundaries or limits. It is difficult, however, to prevent the exploration of myth from lapsing into the literal and the comfortable, from becoming nothing more than a comforting fantasy. I think there should be an element of danger as one works with metaphor and myth. Not physical danger, obviously, but rather an element of psychological danger in the sense that one is courting awarenesses that once realized, may bring one to one’s knees, subvert one’s ego and its perceptions of the self, and perhaps even radically change one’s life. No, myth is certainly not a tool for children, nor is it for childish adults. To quote Mephistopheles in Goethe’s Faust: “The very best that thou dost know/Thou dar’st not to the striplings show.”