MythBlast | The Uses of Myth: Disengage Your Arrows

In the month of April, the Joseph Campbell Foundation is celebrating the impending release of several new editions of two Campbell classics, The Mythic Dimension and Primitive Mythology, both coming soon as eBooks and audio books.
………
Both works delve deeply into one of the most enduring questions about myth: how do we use it? Inspired by this, JCF will be focusing our musings this month on this question, sharing thoughts from our community, and inviting you to dive deep into your own ideas about how we collectively and personally use myth in our cultures and our individual lives. 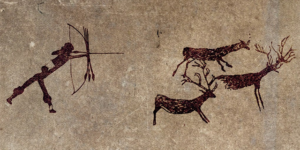 As an opening salvo for this month’s conversation, I’d like to share an idea from  Campbell’s prologue to Primitive Mythology, the first title in his series, The Masks of God. In this articulation of mythology’s abiding role in the human– and as he suggests a few paragraphs later, even beyond human – experience and life, what intrigues me most is that he quantifies the study of this role as a science. This prologue is entitled, “The Lineaments of a New Science.”

While I think that perceiving the study of myth as a scientific one versus other disciplines is an opening point for a grand argument (lots of grand arguments, actually), what it has opened for me, and I’m hoping that it might open for you, is the broader idea of one of mythology’s uses as an invitation to think.

Often, I find, we can use mythology to shore up our own assumptions about ourselves, our values, and our cultures. It is one of the dangers of embracing what we define as archetypal or mythic too literally and closely, so it justifies beliefs rather than opening them. I think one of myth’s highest and best uses, to borrow a phrase from the prosaic world of real estate development, is to understand that its deepest beauty isn’t in building the metaphorical high rise, but instead allowing the ground to lay somewhat fallow, in terms of our own certainty, and instead use it as an invitation to invite us to the uncertainties it offers, so we can think, and think hard.

One of the most evocative invitations I know to do that, particularly in conjunction with Campbell’s ideas, is a rather splendid paper entitled “The Fire is in the Mind” from myth and religious studies scholar (and former Joseph Campbell Foundation Board member) David Miller. He explores Campbell’s work as a scholar in this paper, celebrating his insight – and, particularly in its failures – the ‘drips and leaks’ in his thinking – and works how mythology is both challenged and challenging in careful thought.
___
Miller writes, “If someone assigns a so-called “meaning” to a myth, it then serves to engage energy and consciousness to itself (mythoduly, idolatry of myth and the study of myth).  For myth to work properly, “meaning” must be withdrawn, deferred, itself a catapult into the unknown and the unknowable and to be left behind.  Myth is like a bow disengaging an arrow.” (Fire in the Mind)
___
May your arrows be disengaged!