MythBlast | The Winter Solstice and Other Metaphors 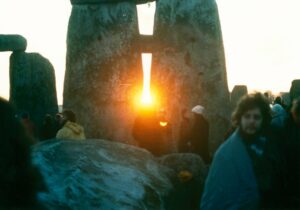 The winter solstice approaches and soon the sun’s course will reach its lowest noon altitude and its shortest day, marking both the end and beginning of another solar year. Hence, this day aligns itself with transmutation, with endings and beginnings, with death and rebirth, both metaphorically and physically.

Among other things, the sun is a symbol for consciousness because its light reveals what otherwise would not come to be known. Jungian psychology holds that the conscious attitude which the ego adopts toward life is arguably the chief component to psychological adaptation.

And so I sat for some time, considering what would be a valuable direction or attitude through which to point the light of one’s conscious attention—and especially during a time when the process of new beginnings is being supported and enacted by the local cosmos. I eventually concluded that quality of life is a worthy direction—simply to live life well.

Not so long ago I’d have called this the goal. But then I encountered Chogyam Trungpa’s liberating insight “The path is the goal.” This simple reminder steers one away from the future—from a concept which, true to its name, remains ever in the future. Whereas this very uncomplicated phrase speaks to training one’s attention on the constant (and indeed, inescapable) realm of the present—the eternal moment which is hardly a moment but rather a field in which the expressions of existence emerge, dissolve, and reemerge in a play of apparently ceaseless transmutation.  In this context, time can be defined as a conceptual invention that tracks transmutation through the field of the now. Living well is therefore a practice which can be accomplished at this very moment and only at this very moment.

To the point at hand, the winter solstice is a relatively consistent event that rises and dissolves in a transmutation we label December 21st. The metaphysical nature and value of this event is aptly addressed in Joseph Campbell’s The Inner Reaches of Outer Space: Metaphor as Myth and as Religion. In brief, “outer space” denotes the dimension of matter—the tangible environment of physical reality we naturally perceive as outside ourselves; whereas “inner space” denotes the dimension of psyche—the subjective reality of interior experiences like gnosis, emotion, and meaning. Their interplay lays the foundations of human experience. Depending on one’s method of approach—that is, the hermeneutic and attitude one chooses to employ—personal and collective experience take on different levels of value and depth.

Metaphor is a highly effective hermeneutic — a tool for unlocking communication and understanding — because it brings the outer and inner into relationship, translating outer phenomena into inner experience while simultaneously substantiating inner experience in the form of images. Or, to put it another way, image is the wardrobe of the immaterial—of energies, concepts, archetypes, emotions, psychological structures, and so forth.

It is therefore fitting that Campbell opens his book with descriptive macrocosmic imagery: the stars and galaxies in which we somehow find ourselves, the Big Bang which brought forth, from infinite energetic density, substance. And all these are describing, through metaphor, the depth and vastness of the interior of the human psyche.

Surely, Campbell’s description of the universe addresses a much larger scale than does the winter solstice, but the metaphors remain consistent and true. Of course some readers may have better ideas for transmutations that are more valuable or appropriate than the one I came up with. For that is a matter of personal preference.

What is of greatest importance is that there is a macrocosmic event that can help to precipitate and support through metaphor and natural law whatever it is one wishes to transmute in their own life. And for this author, living life well sounds like a worthwhile endeavor, to be lifted through a joint effort between personal consciousness and the sun, into rebirth, and into the new year.