MythBlast | This Day, the Beginning of Works; Remembrance of the First Day

Tomorrow, Wednesday, September 20th, Rosh Hashana begins at sunset. Rosh Hashana is the Jewish New Year marks the time for inner reflection, atonement, and renewal. Rosh Hashana literally means head (or beginning) of the year, and on this day it is a common practice to attend High Holy Day services, during which one has ample opportunity to listen to the plaintiff wail and poignant sigh of the shofar—a hollow, polished ram’s horn—and participate in a Tashlich (or Tashlikh) ceremony in which one symbolically casts off one’s sins by throwing bread crumbs into a naturally running body of water. 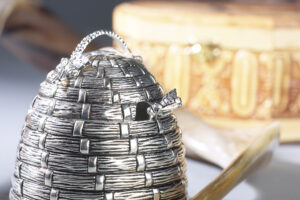 The tradition underlying Rosh Hashana is that it marks the anniversary of the creation of Adam and Eve and the important role humanity plays in God’s creation. More secularly, Rosh Hashana marked the beginning of the economic year—the beginning of harvest season—in the ancient agrarian societies of the Middle East. Some foods, rich in symbolism and mentioned in the Talmud, such as dates, black-eyed peas, leeks, spinach, and gourds, are traditionally eaten during Rosh Hashana. Other foods like pomegranates, apples dipped in honey, lamb, fish, and new fruits are often included in traditional meals as well.

Everything that will occur in the coming year is decided on Rosh Hashana, which is not simply the new year, for Rosh Hashana is also known as the day of judgment. Now, this may seem strange as one might think an omniscient, omnipotent creator could set up a universe that didn’t need renewal every year, or need to be reminded to return his focus and attention to his creation. YHWH, in fact, created an opportunity for human beings to collaborate on the creation of the world, and that through renewed intention we essentially co-create the world with Him. If the world exists another year, it is because believers demonstrate sufficient enthusiasm and commitment to making the world and ourselves anew; in this moment of the new year and its new beginnings, one has the opportunity to discard old judgments, offload obsolete perspectives, rectify mistakes and essentially discover that one has a blank slate on which to write new values and a new vision that may serve to guide the rest of our lives. Yom Kippur, the day devoted to spiritual cleansing, the reparation of wounds inflicted upon others and making amends for the mistakes of the previous year, comes only a week later. I think that Yom Kippur, the holiest day on the Jewish calendar, coming only a week into the new year is an indication that what we are being judged upon is not our actions, but rather, the genuine, earnest, heart-felt intentions and the depth of commitment to the revisioning and the revaluing we bring into our own individual conscious awareness. There is an ethical argument that states that actions are best evaluated by the actor’s intent rather than the action’s consequences. For instance, it may be true that people who intend to do harm will eventually succeed, but what makes them culpable, or even evil, is their desire to harm others more so than their actual actions undertaken to that end. Despite the fact that Dr. Johnson thought hell was paved with good intentions, given that we have so little control over the consequences of our actions, and given that so many among us seem to look for opportunities to belittle, hate, and hold power over others, well, I just think a world filled with good intentions would be paradise.

You can read more about Campbell’s work on Judaism in his important survey of Western myth and religion, Occidental Mythology, now available this new month as an eBook.