MythBlast | Worlds Above, Worlds Beneath – There is No One in the World Like Me

Today, May 29, 2018, the date of the first full moon in May, is the day of celebration for the birth of the Buddha called Vesak. Mythology has it that on the night the Buddha was conceived, his mother, Maya, dreamt a white elephant with six white tusks entered her right side, and ten months later the Buddha was born, miraculously, from his mother’s side. Deities attended him, received him on a golden cloth and laid him gently, very gently, on the ground. The infant promptly got to his feet and took seven steps, pointed up, pointed down, and said in a thunderous voice, “Worlds above, worlds beneath—there is no one in the world like me” (Campbell, Myths of Light, 137).

D.T. Suzuki once remarked, “You know, they tell me when a baby is born, the baby cries. What does the baby say when the baby cries? The baby says, ‘Worlds above, worlds beneath—there is no one in the world like me’” (p. 138). So, all babies are Buddhas! What’s the difference between Queen Maya’s baby and all the other babies? Siddhartha knew from the beginning that he was Buddha; all the other babies are caught in the illusion of materiality and the worlds of perception and sensation, but not him. Buddha means “The Awakened One” or “The Illuminated One,” and what brings one to illumination other than a deep, penetrating, attention to life, life exactly as it is, an attention to life that allows one to realize that the forces of nature, the pulse of the cosmos, course through and pulse in you, too. The nature of the Universe is your nature as well. 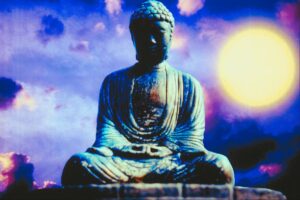 So how does one celebrate Vesak; how does one pay homage to the Buddha? Make a sacrifice or an offering? Meditate in a shrine, chanting, hoping to be transformed? The story goes that when the Buddha was dying, he noticed his most beloved disciple, Ananda, weeping. Buddha gently instructed Ananda not to weep, but rather focus on the eternal Dhamma (teachings of the Buddha) for that is what will become Ananda’s teacher once the Buddha has passed; that’s how you honor Buddha. The Buddha doesn’t have to be present for one to find Buddhahood within one’s self; one may discover for oneself by following the Dhamma that one is indistinguishable from the eternal, inseparable from the source. We celebrate the Buddha by placing his teachings, and most importantly the living into them, at the center of daily life. Every day, but particularly on Vesak one might think how one might bring happiness into the lives of others through actions of loving-kindness, philanthropic generosity, comforting the sick and afflicted, or any other way one might think of, as Aeschylus put it, to “Tame the savageness of man and make gentle the life of this world.”

You can find Myths of Light as a paperback, eBook, and audio book here.