Note: We continue our theme of gratitude this November, with an article written by former teacher and JCF Rights and Permissions wrangler, Michael Lambert. As we do, we thank all of the people who bring mythology to life around the world in creative ways, inviting people to engage their imaginations, creativity, and explore their sense of self as they do. Especially kids!
Back in November of 2014, Bob Walter, President of the Joseph Campbell Foundation, received an email from Meghan Stengel Gardner, inviting a representative of the Foundation to visit her Wizards & Warriors Camp, a program designed around Joseph Campbell’s concept of The Hero’s Journey®. She was introduced to the work of Joseph Campbell through the acclaimed PBS video series, Joseph Campbell and the Power of Myth with Bill Moyers.

Bob handed it off to me since the camp is outside of Boston and I’m not that far away in Eastern New York. But life is full of details and this one slipped off the table and rolled under the couch. The universe, however, will not be denied its desires, so when I saw a post on a mythically oriented Facebook page I follow describing a summer camp program, with a picture of interestingly costumed kids, I clicked the link. Sure enough, Wizards & Warriors. I contacted Meghan, author of the Facebook post, and found that not only is she the founder of this camp program, but used to live in my neck of the woods and is good friends with people I know. Okay then. Road trip! 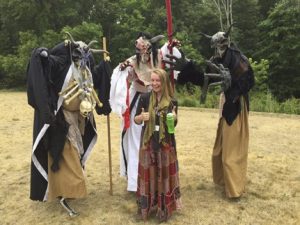 I met Meghan outside Gann Academy in Waltham, Massachusetts, the summer home of Wizards & Warriors on a gray, drizzly August afternoon. Her passion for this work was immediately evident. She explained the basics of the program and took me on a tour of the facility, and wherever we went, we came upon costumed camp groups moving between activities. The costumes, it must be stated, are not Walmart quality rubber masks and nylon suits.  Meghan showed me the Logistics room, or the Command and Creation Center as she calls it, where costumes and props are stored and made and makeup is applied. Her daughter, Marin, a graduate of Massachusetts College of Art & Design, is the program’s costume artist and hand crafts much of what is worn by staff and campers.

The campers, referred to as Heroes, at Wizards & Warriors actively participate in a mythic narrative that evolves day by day. There is no set script. Staff conference at the end of each day to determine where the story is going the next, as determined by the choices and actions of the campers that day. Consultants are utilized to ensure that the stories reflect accurately on the cultural traditions being expressed, and each year a different cultural tradition is researched and embedded into the narrative. Thus, the story seamlessly continues, year after year. Half of the stories utilized have to be from outside the European tradition. 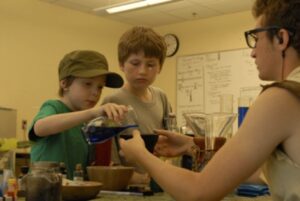 But it’s in the details that this program proves itself. “We hire teachers, we call them Guardians,” Meghan told me, “who design our story-based curriculum where the Heroes learn Physics, Biology, Chemistry, Literature, Latin, History, and much more in order to succeed in the adventures. We have seven year olds who can recite and demonstrate Newton’s Laws of Physics because that’s what’s necessary so you can learn your first level of spells.” New spells have to be carefully researched and science based; if approved, they are added to the Book of Spells. “Heroes” record their adventures in The Book of Deeds kept in the Library. The stories now go back seven years.

Though the work of Joseph Campbell is a primary inspiration for Wizards & Warriors, you don’t see his name very much. “Follow your bliss” is not posted on the walls. But you will find his ideas embedded within the DNA of the philosophy of this program’s design. A Hero, the campers are told, is a person of courage, honor and compassion. Then they are directed to define these words for themselves. “Our ‘Library,’ Meghan says, “is actually a Greater Spirit in our world, who bestows upon the Heroes clues about the stories as well as helping them engage in a discussion around how they can take what they are learning about at camp and apply it to their life outside of camp.  This is what we call ‘Transference.’” “Wonderment,” a new application in the planning stage, will consist of an online community to help the Heroes transfer their new skills into the rest of their lives, and share with each other the changes they experience both in themselves and in their outside communities. 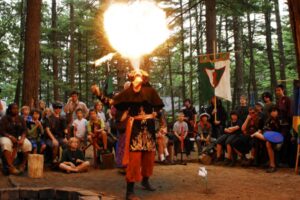 I left Meghan where we’d met. Though there was still a light drizzle, the sky to the west promised a finer day for my drive home. I promised Meghan I would share my experience with my colleagues at the Joseph Campbell Foundation, and how impressed I was that this program that speaks directly to, and fosters, the creative imagination of children in no way rides the coattails of Joseph Campbell’s notoriety. What she’s accomplished, it seems to me, is to have done what Campbell would want us to with his work: synthesize it into our own work which puts us in service to our passion to the fulfillment of not only ourselves, but to the larger community.

Yearning for your own grown-up creative mythic play? Join us at one of our Mythological Toolbox® Playshops in 2018! Join us at Esalen in March or in the Catskills in July.

After a career as a public school educator and advocate on behalf of kids in special education and English, and one of the longstanding moderators of JCF’s worldwide forum conversation, “Conversations of a Higher Order,” Michael brings his attention to detail and passion for Campbell’s work managing Rights and Permissions for the Foundation. You can catch some of his thoughts on teaching at education on his blog, Clemsy’s Corner.