NewsBlast | The Ecstasy of Being is Now Available 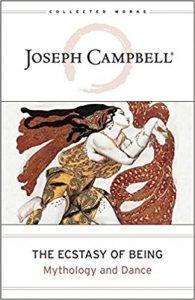 “The dance, like all the arts, came into being in a rich, primeval atmosphere of mythological inspiration, long served society as a conjuring instrument, and matured in a context of godly and demonic presences. “— Joseph Campbell, Ecstasy of Being

The Ecstasy of Being brings together seven of Campbell’s previously uncollected articles on dance, along with “Mythology and Form in the Performing and Visual Arts,” the treatise that he was working on when he died, published here for the first time.

In this new collection Campbell explores the rise of modern art and dance in the twentieth century; delves into the work and philosophy of Isadora Duncan, Martha Graham, and others; and, as always, probes the idea of art as “the funnel through which spirit is poured into life.” This book offers the reader an accessible, yet profound and provocative, insight into Campbell’s lifelong fascination with the relationship of myth to aesthetic form and human psychology.

Joseph Campbell’s collected writings on dance and art, edited and introduced by Nancy Allison, CMA, the founder of Jean Erdman Dance, and includes Campbell’s unpublished manuscript “Mythology and Form in the Performing and Visual Arts,” the book he was working on when he died.

Read THE ECSTASY OF BEING.