We’re delighted to announce the release of the first two lectures in Series II, volume 6 of the Joseph Campbell Audio Collection: Mythic Ideas and Modern Culture. 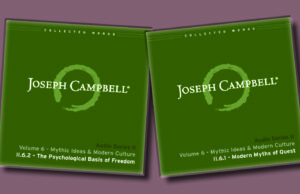 Joseph Campbell presents mythic ideas and concepts with a unique perspective of modern cultures. As he discusses art and its relationship to mythology today, he explores the confrontation of religion and society and addresses the concept of “The Psychological Basis of Freedom.” These lectures continue to illuminate and enlighten us as we move forward in the twenty-first century.

In the first lecture, “Modern Myths of Quest,” Joseph Campbell offers a modern perspective on the Illumination of myths. After delving into the perspectives of Jung and Freud, Joe ties these ideas to the modern works of James Joyce and Thomas Mann, showing how the human psyche gives shape to the Hero’s Journey.

In the second lecture, “The Psychological Basis of Freedom,” Campbell addresses the psychological perspective of freedom as it relates to Modern Man. He touches on Roman perspectives and the “Tree of Enlightenment” and once again reminds us of the importance of acting out of our center.