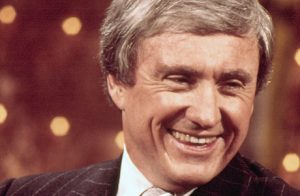 Griffin was, above all, curious. He wanted to know about peoples lives, he needed to know about the stories behind celebrities’ success. He said to have been the happiest when on stage, broadcasting his show to the nation.

That happiness, that sense of accomplishment, comes from Griffin’s chosen path: a path of Bliss. Like Joseph Campbell explained, in the PBS series Power of Myth, when one goes after their bliss, their personal happiness, all else points to success. He might not have known it from the beginning, but Merv was living proof of Campbell’s studies on Bliss and Fulfillment.

Read more about Merv Griffin and his captivating personality.

From Los Angeles Times on August 14, 2007
Attributed to Peter Barsocchini (An Appreciation)