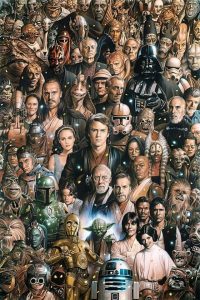 Alexandra Petri, a Star Wars enthusiast and blogger for The Washington Post, wonders if the new franchise stories will only be modern adaptations of previous films, or stories in their own right.

It is known that George Lucas once called Joseph Campbell “My Yoda”. Without these two brilliant minds, the multitude of characters and storylines we know and love wouldn’t exist today.

Adding to that multitude, new Star Wars movies are now created every year. It’s an exciting time for fans all over the world, but many worry about the lack of new storylines.

In a galaxy far, far away, there just might be enough space for new Heroes.

From The Washington Post on May 4, 2016
Attributed to Alexandra Petri (Opinions newsletter)