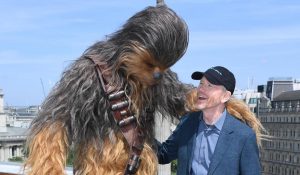 Bentley gives voice to Howard to explain his process and how he approached such a challenging film, heavy with expectations from fans and executives.

According to the director, Solo focuses on the hero’s journey, showing that Joseph Campbell continues to influence the saga after so many years.

From The Star on May 22, 2018
Attributed to Rick Bentley (Tribune News Service)