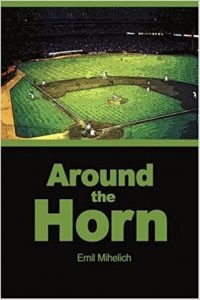 Set in 1949 in the mining city of Butte, Montana, a world unto itself sitting a mile above sea level in the southwestern corner of the state, Around the Horn takes its readers on a journey into the world that was with the hope of discovering what could be-both now and in the decades and centuries to come. After World War II baseball was king in America as well as in Butte. As result, it can serve as a metaphor for life, holding out infinite possibilites because of its freedom from the ticking of the clock. To score a run the ballplayer must return to home plate, the place from which he started. Similarly, to complete our own journey “around the horn,” we must, as T. S. Eliot reminds us, return to the point from which we started and know the place for the first time. Around the Horn celebrates the adventure and shows us the way.

I feel rather foolish nominating my own books, but I wouldn’t take this step if I didn’t believe in them. In Joseph Campbell I found an ally for my own independent thoughts and conclusions that have resulted from a lifetime, so far, of search and discovery. The books I am nominating, in my role as associate, qualify as expressions of what Mr. Campbell identifies as “creative mythology,” and they are built squarely on the foundation supplied by the conflict between authority and experience — also clearly reflected in the Garden of Eden story — he discussed in his volume of “Creative Mythology” from ‘The Masks of God.’ My books definitely expand on ideas associated with his work, and I am convinced that, at the very least, Mr. Campbell would be pleased with my efforts to illuminate the path of individual responsibility — the path of the Hero, the path of “individuation” — in an era that has witnessed the waning of the power and influence of institutional authority. I hope I am not out of line in nominating my own books, but if they don’t belong in Mr. Campbell’s category of “creative mythology,” they don’t belong anywhere. I would welcome the opportunity to discuss them with any interested Joseph Campbell Associates. Emil Mihelich