Building on the best-selling tradition of previous editions, Classical Mythology, Eighth Edition, is the most comprehensive survey of classical mythology available in one volume. Featuring the authors’ clear and extensive translations of original sources, it brings to life the myths and legends of Greece and Rome in a lucid and engaging style. The text contains a wide variety of faithfully translated passages from Greek and Latin sources, including Homer, Hesiod, all the Homeric Hymns, Pindar, Aeschylus, Sophocles, Euripides, Herodotus, Plato, Lucian, Lucretius, Vergil, Ovid, and Seneca. The authors incorporate a dynamic combination of poetic narratives and enlightening commentary to make the myths come alive for students. Offering historical and cultural background on the myths–including evidence from art and archaeology–they also provide ample interpretative material and examine the enduring survival of classical mythology and its influence in the fields of art, literature, music, dance, and film.
Classical Mythology, Eighth Edition, enables students to explore the fascinating nature of Greek and Roman gods, goddesses, heroes, and heroines, and to appreciate the most significant ancient sources of classical myths and legends. The book is beautifully enhanced by 22 color plates and 160 black and white illustrations with lucid explanatory captions, as well as maps, a glossary, a companion website, and an instructor’s manual.
Classical Mythology, Eighth Edition, has been updated and revised to reflect recent scholarship, featuring:
* The most recent results of excavations at Troy and Orestes
* Expanded discussions of Asclepius, Antigone, and Orestes
* Many new text boxes including those on Homer, Hesiod, and the worship of Artemis at Brauron
* A new chapter (25) on Ovid’s treatment of classical mythology
* Incorporation of local legends–for example, the myth of Bellerophon–in relevant myths and sagas (these legends, located in the former Chapter 25 in the previous edition, have now been distributed throughout the book where they best fit)
* An improved art program, with new images, better-quality reproductions, and improved maps
* Numbering of lines for all translations, for easy reference
* Improved indexes and updated bibliographies
* An improved and updated companion website, including images and maps
* An instructor’s manual and test bank (available for the first time) 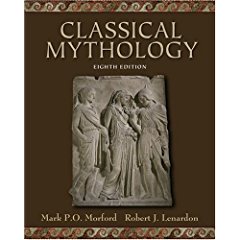