Confucius: The Unwobbling Pivot / The Great Digest / The Analects 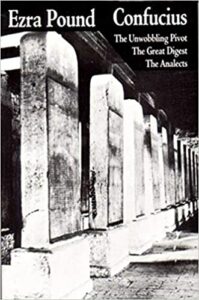 The study of Chinese culture was a dominant concern in Ezra Pound’s life and work. His great Canto XIII is about Kung (Confucius), Cantos LII-LXI deal with Chinese history, and in the later Cantos key motifs are often given in Chinese quotations with the characters set into the English text. His introduction to Oriental literature was chiefly through Ernest Fenollosa whose translations and notes were given him by the scholars widow in London about 1913. From these notebooks came, in time, the superb poems entitled Cathay and Pound’s edition of Fenollosa’s Chinese Written Character as a Medium for Poetry. But it was Confucius’ ethical and political teachings––that most influenced Pound. And now, for the first time, his versions, with commentary, of three basic texts that he translated have been assembled in one volume: The Great Digest (Ta Hsio), first published in 1928; The Unwobbling Pivot (Chung Yung), 1947; and The Analects (Lun-yü), 1950. For the first two, the Chinese characters from the ancient “Stone Classics” are printed en face in our edition, with a note by Achilles Fang. Pound never wanted to be a literal translator. What he could do, as no other could, is to identify the essence, pick out “what matters now,” and phrase it so pungently, so beautifully, that it will stick in the head and start new thinking.