Myths and Tales of the Chiricahua Apache Indians 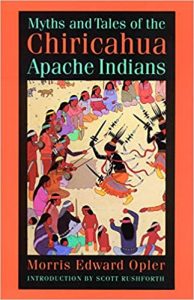 Opler conducted field work among the Chiricahuas in the American Southwest, as he had earlier among the Jicarillas. The result is a definitive collection of their myths. They range from an account of the world destroyed by water to descriptions of puberty rites and wonderful contests. The exploits of culture heroes involve the slaying of monsters and the assistance of Coyote. A large part of the book is devoted to the irrepressible Coyote, whose antics make cautionary tales for the young, tales that also allow harmless expression of the taboo. Other striking stories present supernatural beings and “foolish people.”

This text was included on Joseph Campbell’s Reading List for his mythology course at Sarah Lawrence College.