Practical Campbell Essay: The King & “I”

In this Practical Campbell essay, Stephen Gerringer tackles the archaic practice of human sacrifice, focusing on the role ritual regicide may have played in the evolution of the self-aware ego, and the symbolic significance this ancient rite holds for our lives today.

That’s a concept difficult to absorb.

We’re all familiar with the typical Hollywood scenario: either a band of primitive, bloodthirsty, drum-pounding savages bearing a fair, unspoiled maiden, sometimes drugged, sometimes bound, to the edge of a volcano, her sacrifice a means of appeasing an angry god – or a variation of the same powerless victim lashed to an altar in some sort of wild, orgiastic, black magic ritual.

Of course our sympathies lie with the hero who inevitably rescues the maiden from her fate – and condemns the collective celebrants to theirs. We’re on his team, for his character reflects our own cultural perspective. I’ve yet to find myself rooting for the sinister, knife-wielding, maniacal fanatic usually depicted in the role of the officiating priest…

But then, it’s just a movie, a far cry from reality.

Popular belief often assumes those sacrificed were either bred to the role and kept ignorant of their fate, or were slaves, criminals, or captives of war forced to the altar. There is certainly evidence of this in several cultures (e.g., the “Flower Wars” between Mayan cities to secure captives for sacrifice).

However, in the period that marks the birth of civilization – focusing on the two thousand years between 4500 and 2500 B . C . – the sacrificial ritual claimed not the dregs, but the cream of society – the best the community had to offer.

Nor were members of these societies “primitive” savages barely removed from the beasts. Joseph Campbell points out that the practice of human sacrifice is found in the early stages of every literate high culture.

Why would a people do this? What could they be thinking – or were they thinking at all? Does our automatic condemnation of ritual murder preclude all possibility of comprehending their mindset? 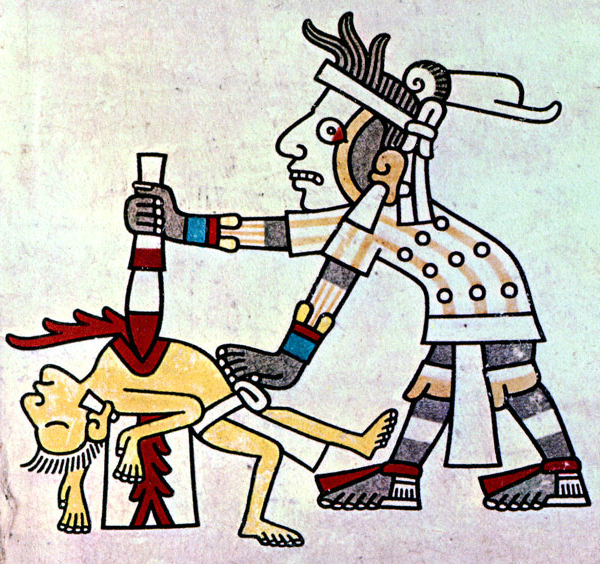