From AudioFile
Two classics feature well-loved comedians. In the first, Robin Williams
adopts the voice of an old cowboy telling the story of Pecos Bill.
Backed by the lively music of Ry Cooder, Williams lets loose with
energetic vocal antics, whether hes dropping his false teeth mid-story
or describing Bill and his coyote family. Puss in Boots, the story of a
clever feline who transforms his master into a prince, is read by
Tracey Ullman. Her voice shifts easily from the cool British tones in
the narrative to over-the-top French accents in the dialogue. Both
stories are fun to listen to, and rich with the literary and auditory
detail of the Rabbit Ears series. J.C.G. © AudioFile 2007, Portland,
Maine– Copyright © AudioFile, Portland, Maine

When
his dearly departed father leaves him only a tomcat, Claude feels
short-changed and tries to do away with his feline inheritance. The
cat, however, devises a plan to save himself by promising to transform
his owner into a noble prince. 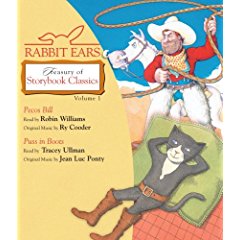