MythBlast | Shiva and the Great Dance 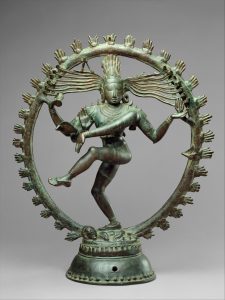 Shivaratri, The Great Night of Shiva, is celebrated this year on the 24th of February, the 6th night of the Phalgun, and devotees fast and maintain vigil all night. This, the largest of Shiva celebrations, centers on the tradition which allows that on this night, Lord Shiva performed the Tandava, the dance that is the source of the cycles of creation, dissolution, and destruction. Tradition also holds that it was on this day that Shiva and Parvati were married. Religious penance may be found during Shivaratra through a night long practice of meditation and yoga.

Various scholars have noticed similarities between Shiva and other Greek deities; even Alexander the Great called Shiva the “Indian Dionysus” and his phallic symbolism is shared by Nordic, Irish, and Roman gods as well. In Vedic scriptures, Shiva is very much like Rudra, the god of the storm. The Rigveda says that Rudra has two natures, one destructive and sometimes cruel, the other peaceful and kind. Shiva, as we have come to know him, may be a conflation of Rudra and many older gods into the single figure familiar to us today as a god of paradox, a god of mystery, and a god of, perhaps, unlimited power—a power to create as well as to destroy.The familiar image of four-armed Shiva dancing within a ring of fire perfectly captures all the paradoxical oppositions that are unified in the contemplation and understanding of this image: creation-destruction, temporality-eternity, masculine-feminine, and more. This image of Shiva, Nataraja, is known as The Lord of the Dance, specifically the dance of the energies that create, preserve, and destroy the universe. The ring of fire surrounding him is representative of the cosmic fire that creates and annihilates everything and incorporates the cycles of reincarnation governing human existence as well as the cosmic cycles of the Yugas, the ages of time that are also repeated. The fire also represents the evils and joys—dangers, knowlege, and warmth—of daily living. Nataraja is also possessed of a Mona Lisa like smile connoting his calm pleasure at finding himself in the center of the sublime forces of the universe swirling around, in, and through him.

Living a human life well inevitably requires us to dance with the vicissitudes of existance, pressing our limited human will as far as we are able and then, when we find we are at the edges of ourselves, to let go and allow ourselves to be led in the dance until we find another path to follow, taking the lead once more and following that new path as far as we can and submitting once more to fate, to the inescapable cycles of life and the demands of living. Living life this way, in full relationship to the nature of existence is demanding, rigorous, and exacting, but the more one enters the dance, the more one may experience the difficult pleasures found therein, and people just might wonder what you’re smiling about.

You can read more about Shiva in Campbell’s work, Oriental Mythology; please click the title link to stop by the Joseph Campbell Foundation website and learn how you can get a copy.

Image: “Shiva as Lord of Dance (Nataraja)” by Indian (Tamil Nadu) via The Metropolitan Museum of Art is licensed under CC0 1.0