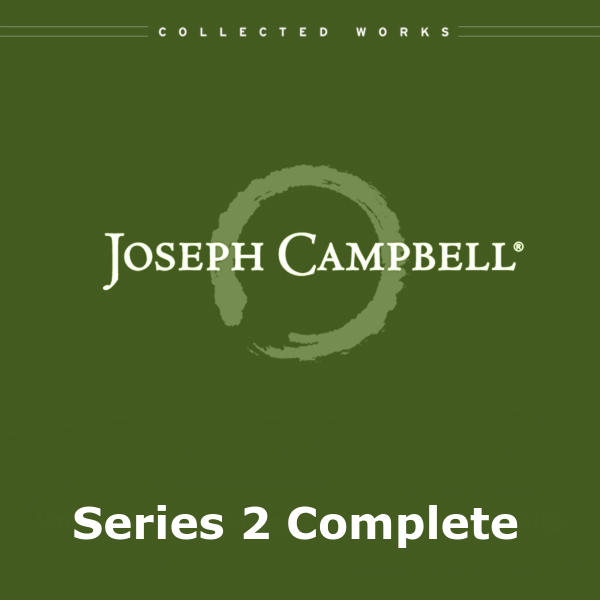 Lectures from the middle of Campbell’s career, starting just after the moon landing in 1969 and counting to the late 1970s.

In Series II.1 Joseph Campbell provides a “brief history of World Mythology” by introducing us to the functions of Mythology and how the functions differ from East to West. Lectures include an interpretation of the sound of AUM, how Buddhism works in China, Jung, Thomas Mann, James Joyce, Grail Mythology, the relationship of schizophrenia and shamanism to the Hero Journey, and other topics. This tour de force is Joseph at his best.

Unique among the volumes in the Joseph Campbell Audio Collection, this collection includes eleven separate recordings from a single week-long workshop — all recorded at the renowned Esalen Institute in Big Sur, California. “A Brief History of World Mythology” provides over twelve hours of Campbell covering his subject as no one else could.

In this series, Joseph Campbell offers an overview of world mythology through a variety of lenses. The topics range from Christianity to the East, including a lecture that ties Carl Jung and Buddha into similar realms. The final question is “What is Your Myth Today?”

Beginning with the symbols of the Christian faith, Campbell explores medieval history from the perspective of Tarot deck. Discussions of mythic images, mythic goddess, and alienation and rapture offer a deep look into Campbell’s unique view of such topics.

In Volume 4, Campbell delves deep into the relationships involving Sigmund Freud, Carl Jung, and the concepts involved in Kundalini Yoga. His thoughts on aesthetic realization, Dante’s “La Vita Nuova” and his thoughts about women as the goddess, the universe. Whether it’s Yoga in relation to modern psychology or the chakras of transformation, he is unparalleled in his clear concise blending of these ideas. In the last lectures of this Volume, he relates the archetypes to mythology and closes out by offering a detailed look at the four aims of Indian life.

The ever changing story of mythology is brought to us with a modern perspective by Joesph Campbell. In this volume, he talks of mythology of today, his thoughts on how it relates to violence in America. Whether it’s life, literature, art or “The Way of Beauty” you don’t want to miss his 20th century perspective on the ageless story of man!

Joseph Campbell presents mythic ideas and concepts with a unique perspective of modern cultures. As he discusses art and it’s relationship to mythology today, he explores the confrontation of religion and society and addresses the concept of “The Psychological Basis of Freedom.” These lectures continue to illuminate and enlighten us as we move forward in the 21st century.