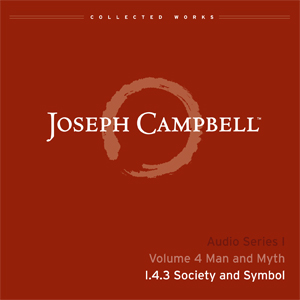 Society and Symbol (Audio: Lecture I.4.3)

I think one could define a symbol as an energy-releasing and -directing image, and since the symbolic systems of the world include many symbols that are practically universal, the questions comes up as to the universality of symbol, and then how the universal symbol should be directed to this, that or another culture intention. What is it that affects these directions?
— Joseph Campbell

Joseph Campbell begins by noting how a symbol can work as a kind of “automatic button” to release and channel energy. Why do some symbols seem almost universally potent? It is because such resonant symbols speak to human experiences that have remained constant throughout the ages. Campbell explores how an individual’s relationship to society changes as one grows from infancy to old age. A culture’s view of this shifting dynamic is best understood, he argues, by examining the symbols with which the society expresses its ideals. He shows how western psychologists, particularly Sigmund Freud and Carl Jung, have shaped our understanding of the human experience. He concludes with a discussion of key Oriental beliefs, demonstrating how the prevailing myths and dominant symbols of each culture reinforce its understanding of an individual’s role.