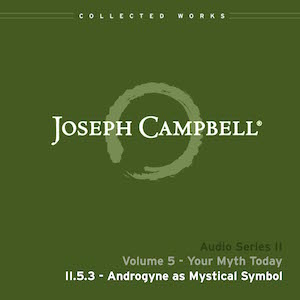 My subject tonight is the androgyne as mystical symbol. And the first point I want to make before engaging in the argument is that a symbol derives from the psyche, speaks to the psyche by way of reflection from apparently outside forms. And one of the greatest mistakes made in the interpretation of symbols is to think that they are references to historical concrete actualities. — Joseph Campbell

This lecture offers the viewpoint of androgyny being incorporated in people’s bodies by artificial means. While Campbell walks us through the concept as covered by art through the centuries, his description of various slides (not included) paint vivid images in our minds. Be it Kali (the black one), artifacts excavated in Catal Huyuk, or images from the mystery religions appearing on the Pietroasa bowl, you’ll be one in spirit at the end of this lecture.

This lecture was recorded at the Jung Institute (New York) in 1980.