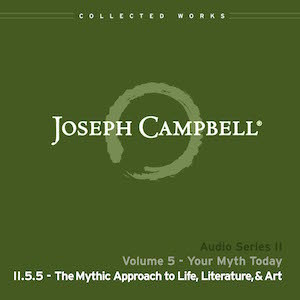 In India the ultimate mystery is defined in three terms: being, consciousness, and bliss. Where your bliss is, there’s your adventure. And it will be a bliss that will involve pain. It will involve excruciating suffering. But where the bliss is, is the call. And that I give you as my word of good wishes that you will have the spunk, the guts to follow your own lead. And don’t do as you’re told. — Joseph Campbell

From the sun, moon, stars and earth, mankind tries to give meaning to life through literature and art. Joseph Campbell brings these topics into focus by describing mystical functions and attitudes, then sharing Dantes view, the love of a troubadour, and a story of Parzival and the wounded king, and how these relate to fulfilling your “intelligible character.” This is a lecture not to be missed!

This lecture was recorded at the Kent State University in 1975.