Just as people influenced you and played an important role in your life, so you are influencing others and playing an important role in their lives. There is a reciprocal influence, a network of interlocked novels. Who wrote all of these? Schopenhauer says, “It’s as though the world were a dream dreamed by a single dreamer in which all the dream characters dreamed you.” 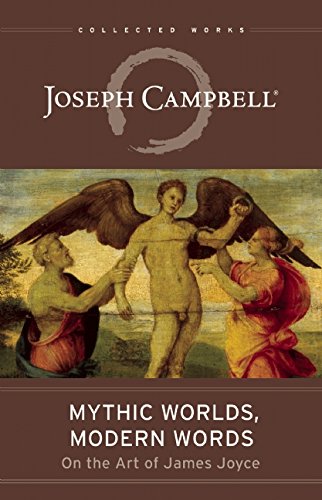 In 1927, as a twenty-three-year-old postgraduate scholar in Paris, Joseph Campbell first encountered James Joyce’s Ulysses. Known for being praised and for kicking up controversy (including an obscenity trial in the United States in 1920), the novel left Campbell both intrigued and confused, as it had many others. Because he was in Paris, he was able to visit the Shakespeare & Company bookstore—the outpost of the original publisher of Ulysses, Sylvia Beach. She gave him “clues” for reading Ulysses, and that, Campbell attested, changed his career. For the next sixty years, Campbell moved through the labyrinths of Joyce’s creations—writing and lecturing on Joyce using depth psychology, comparative religion, anthropology, and art history as tools of analysis. Arranged by Joyce scholar Edmund L. Epstein, Mythic Worlds, Modern Words presents a wide range of Campbell’s writing and lectures on Joyce, which together form an illuminating running commentary on Joyce’s masterworks. Campbell’s visceral appreciation for all that was new in Joyce will delight the previously uninitiated, and perhaps intimidated, as well as longtime lovers of both Joyce and Campbell. Now available in a trade paperback edition, Mythic Worlds, Modern Words is a masters meet-up between the twentieth century’s quintessential mythologist and its most exemplary literary modernist. Forty years of Campbell's lectures, articles and unpublished writings on the novels of James Joyce, drawn together by Joycean scholar Edmund L. Epstein, serve as a lens to examine both the nature of myth in art, and the myriad-minded work of the man whom many have called the greatest literary artist of the modern era. An appendix includes both question and answer sessions from Campbell's lectures, and a series of articles penned by Campbell and Henry Morton Robinson (co-author with Campbell of A Skeleton Key to Finnegans Wake), unveiling the Wake-like themes that suffused Thorton Wilder's Broadway hit, The Skin of Our Teeth.
A Portrait of the Artist as a Young Man
Fiction
finnegans wake
james joyce
literature
modernism
modernist literature
ulysses
Other quotations from this Title

Your biology is related to the biology of plants and animals: they too share the life energies – what we might term "body wisdom," in contrast to mental wisdom. When you move deeper in dream, when you move into the sphere of the permanent energies of your body, your mental wisdom is gradually extinguished, body wisdom (as it were) rises, and you experience the collective order of dream, where the imagery is identical to the imagery of myth. And since some of these images have not been allowed to play a role in your life, you come into relation to them with surprise.
[share]

God isn't a fact. God is a symbol. As soon as you interpret God as a fact, you are off the beam. . .  Where I have used the word God  let us simply say brahman, a neuter noun that refers past itself to the mystery of the total energy of life. [share]

Just as people influenced you and played an important role in your life, so you are influencing others and playing an important role in their lives. There is a reciprocal influence, a network of interlocked novels. Who wrote all of these? Schopenhauer says, "It's as though the world were a dream dreamed by a single dreamer in which all the dream characters dreamed you." [share]