Where eternity shines through time

When you are in accord with nature, nature will yield up its bounty . . . and every sacred place is the place where eternity shines through time. 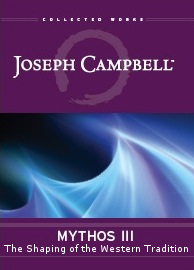 Mythos III: The Shaping of the Western Tradition

At long last, after the long, night-sea journey, the whole of Mythos is complete and available for the first time. Acorn Media has released Mythos III: The Shaping of the Western Tradition on DVD. Filmed over the last years of his life, Mythos captures Joseph Campbell's final series of public talks, his retelling of humankind's "one great story." With the release of this third volume, the entire series will be seen for the first time as Campbell delivered them, and as he intended them to be seen. Once again, the programs are hosted by Oscar®-award winner Susan Sarandon. In Mythos I: The Shaping of Our Mythic Tradition, Campbell began by looking at the world’s most ancient myths and symbols, from the evolution of human consciousness to the prehistoric hunting plains to the civilizations of the Fertile Crescent and the classical world. In Mythos II: The Shaping of the Eastern Tradition, he went on to explore these basic elements as they have expressed themselves in the great religions and philosophies of Asia. Now, in Mythos III: The Shaping of the Western Tradition, he moves on to exploring these same mythological motifs as they have expressed themselves in Western culture. Where the emphasis in the previous programs has been on the evolution of the human species and cultures, now Campbell focusses on the artists, writers and thinkers who have had such a huge impact on the culture of the modern West. Over half of this series is made up of material that has never been released in any form. 1. Love as the Guide--The Arthurian romances, including Tristan and Iseult. 2. The Path of the Heart--Parzival and the Grail Quest. 3. Beyond Time and Space--The Romantic philosophers. 4. Between Pairs of Opposites--Thomas Mann and The Magic Mountain. 5. Into the Well of Myth--The Joseph novels and modern myth.

Sweeping... Anyone interested in mythology, art, religion, or philosophy would be interested in listening to the eloquent Joseph Campbell talk about archetypes in mythology and the similarity of classic stories from many cultures. —BlogCritics.org Late-career Campbell triumphs. —DVDFile.com This series is a must have for fans of Campbell’s work, as well as history buffs and people into cultural studies.... Whether you know Campbell’s work or not, love history, mythology, philosophy and would like to explore something worthwhile, Mythos III is a fine culmination of all of these things and then some. Highly Recommended! —Ruben R. Rosario, Film Monthly

The Grail romance is that of the God in your own heart. And the Christ becomes a metaphor. A symbol for that transcendent power which is the support and being of your own life. [share]

When you are in accord with nature, nature will yield up its bounty . . . and every sacred place is the place where eternity shines through time. [share]