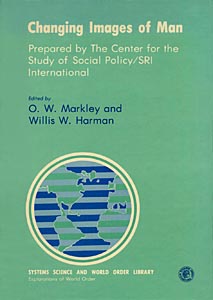 By Joseph Campbell and others | Edited by O. W. Markley and Willis W. Harman | Contributed to by Campbell

Stanford Research Institute (now SRI International) released a report in 1974 that has become a classic in the “alternative futures” literature. It has been adopted as a tetxt in non-traditional courses at more than a dozen universities and reprinted repeatedly by SRI.

Changing Images of Man explores the reasons why changes may have to take place in the fundamental conceptual premises, laws, attitudes and ethics once suitable for guiding the United States and other highly industrialised nations if a humane (and “workable”) future is to be achievable. It discusses the evidence that such changes may be occurring and the possibility that an evolutionary transformation may be underway that is at least as profound as the transition in Eurpoe when the Medieval Age gave way to the rise of science and the Industrial Revolution.