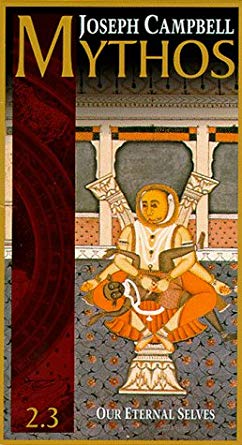 Joseph Campbell’s exhilarating story-telling and masterful teachings continue in this second volume on the One Great Story of our human adventure. Journey with this remarkable man as he takes you through The Shaping of The Eastern Tradition

Our Eternal Selves introduces us to the systems of yoga that grew out of the mainstream of India spiritually. Campbell demonstrates how the Eastern way of perceiving consciousness is radically different from how it is perceived in the West. He demonstrates how yoga acts as a mediation to bring the practitioner to ever-higher stages of consciousness, to unite one’s personal consciousness with the eternal, undifferentiated consciousness of the divine.

A review from All Movie Guide: As part of the Joseph Cambell’s Mythos series, this video introduces the viewer to the various forms of yoga, a diverse form of spirituality from India. It is through this explanation that Campbell shows the fudamental difference between Eastern and Western traditions is the perception of salvation. Oscar Award winning actress Susan Sarandon hosts. — Ed Atkinson